Assembly Summer 2009 is Finland’s largest computer festival. It takes place in Helsinki 6th to 9th of August 2009. ASSEMBLY is a four day computer festival, in which thousands of people and their computers spend the long weekend by meeting friends, playing games, surfing on the net, talking on IRC and enjoying the great productions from the demoscene. It is a great atmosphere of being with likeminded people. I have participated many times this festival when I was younger. ASSEMBLY events are organized by ASSEMBLY Organizing, a group of over 200 volunteers backed by a not-for-profit Finnish company. I have been part of ASSEMBLY Organizing many years working for AssemblyTV TV production done at the festival. Designing and building all the technology needed to run a long live TV broadcast and the audio/video systems for the event itself has been a very good experience. I have learned a lot how big shows are built. It takes a lot of audio, video and computer technology to make this kind of event. The audio/video noise problems I have faced at Assembly and other events have been working with inspired to write my Ground loop problems and how to get rid of them document. 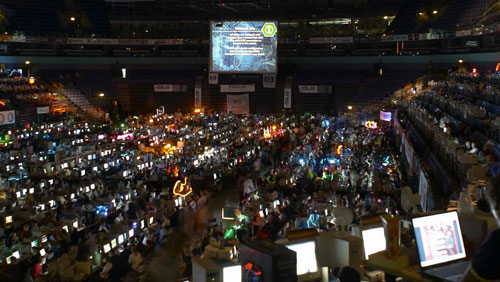