Websocket getting ready for use

Websocket is a promising technology for more advanced web applications. Websocket allows to make a continuous two-way connection between the application software running on web browser the software running on server. WebSocket represents the next evolutionary step in web communication compared to Comet and Ajax. The WebSocket standard (when it gets ready and widely supported) promises to simplify much of the complexity around bi-directional web communication and connection management. After a complex handshake confirming both sides really speak websocket, websocket protocol is MUCH simpler than HTTP. 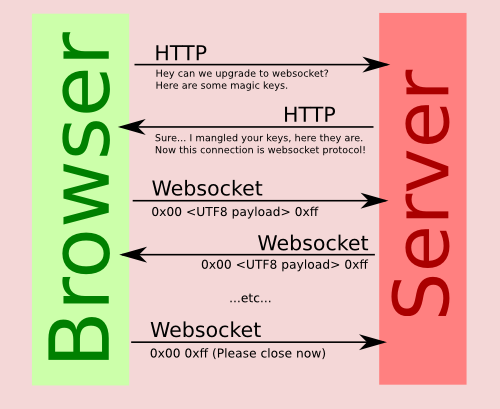 IETF Standard Organization has published RFC 6455 The WebSocket Protocol document. This is a draft standard, which is considered stable.

W3C has in turn made ​​a proposal called The WebSocket API – W3C Candidate Recommendation 08 December 2011 for Websocket JavaScript API.

Websocket working versions have already been in experimental use on many different browsers. WebSocket works in Firefox, Chrome, Safari and Opera (coming to IE10). WebSocket server side implementations are available for C, Java, JavaScript, Ruby, Python, PHP and .NET.

This means you can Start Using HTML5 WebSockets Today, check HTML5 WebSockets Example. Look also HTML5 Demo: Web Socket. Kaazing WebSocket Gateway has had for some time interesting websocket demos, so it is a good idea to read from HTML 5 WebSocket cracks the HTTP request-response barrier article what the founders of Kaazing are thinking of WebSocket.