I got CYPRESS SEMICONDUCTOR – CY3269N – KIT, STARTER, LIGHTING DEMO from Farnell for testing. CY3269N Lighting Starter Demonstration Kit is designed to showcase two Cypress technologies: EZ-Color High Brightness LED Controller (tunable white light control, color mixing) and CapSense (capacitive touch sensing). Data sheet says that this kit illustrates how an intuitive GUI lets a user select any color just by placing a finger within the triangle on the touchpad. The promise is that at the simple touch of a finger, users can illuminate anything from an entire room to a large architectural lighting display with warm, neutral, or cool white light of variable color temperature. Users can create rich and vibrant colored light to set moods, accents, and customize the overall feel of any venue with little effort. CapSense touch sensing has changed the face of industrial design in products such as cell phones, PCs, consumer electronics and automotive features. Sounds something worth to try. 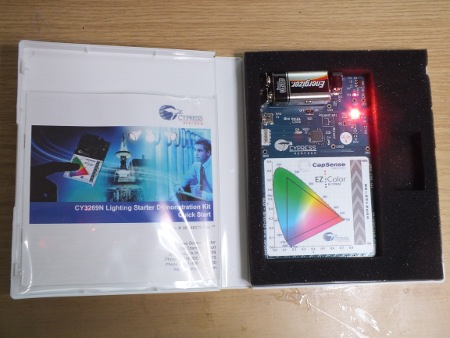 The kit comes ready to use. The package even includes a battery. Just install the battery and start using the kit. That was very easy. Quick start guide gives detailed instruction for functions. The kit works as expected. The color chancing works by moving the finger on color chart. The brightness of light output (the RGB LED on the board) is controlled with brightness slider. Both of those are implemented using capacitive sensing technology. That technology seems to work in well in most cases, but sometimes I felt that the board did not always detect my touches.

There was not much documentation on the package itself. There was one leaflet that gives basic introduction plus web links to more information.

This kit is based on a special PSoC programmable device that contains analog building blocks that can be programmed in a high-level manner. PSoc® is a programmable embedded system-on-chip integrates configurable analog and digital peripheral functions, memory and a microcontroller on a single chip. Cypress’s PSoC® family of devices is well established in programmable mixed-signal microcontroller based devices.

This kit uses the traditional method of implementing power management systems, in this case driving a High Brightness LED lighting systems. It involves connecting PSoC interface to discrete MOSFET switches, and that is exactly what is used in this kit. (Cypress has also PowerPSoC device line that is capable to drive up to 1 A of current using internal MOSFET switches). Here is a closeup of the RGB LED and the MOSFET drivers that drive it. 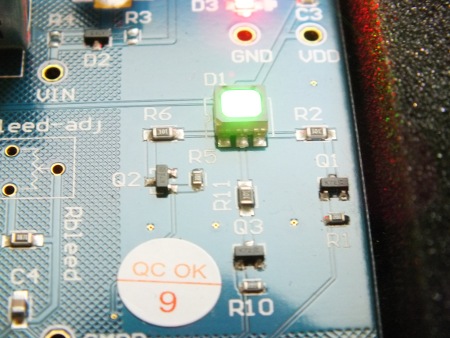 The pulse width modulated signal that drives the LED drivers can be found on the traces that connect to resistors R1, R5 and R10 and MOSFETs. I expected to see traditional PWM signal with pretty fixed frequency, but attacking the oscilloscope to the signal tells that the signal is actually not constant frequency or constant pulse width. It seem that there are different width pulses that seem to appear more or less in bursts. Anyways the signal works as it should. If have though of taking the signal (seems to be at 0-5V signal range) from those locations and use them to drive some more powerful external LED. I have not yet decided the exact circuit to use for that, but I have few ideas to develop. 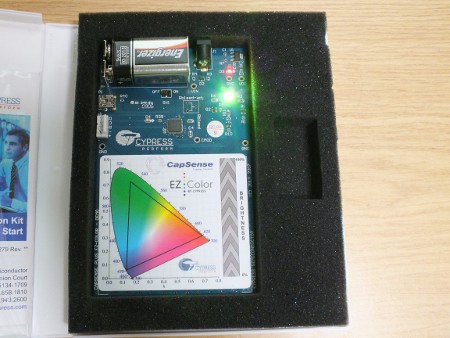 Next interesting thing is how the capacitive sensing works. I connected an oscilloscope to trace going to the capacitive sensing points to see what is going on there. I saw short pulses (1 ms or shorter) at 30-50 Hz rate to capacitive contacts. It seemed that the length of those pulses slightly varied depending if I had finger on that touch point or not.

More information on the CapSense can be found at Getting Started with CapSense guide. This guide is an ideal starting point for those new to capacitive touch sensing (CapSense®) as well as for learning key design considerations and layout best practices to ensure design success.The exact details (including schematics and board files) how this kit was designed can be found at CY3269_Board_Design_Files[Schematic,Layout,Gerber,BOM].zip.

The firmware already programmed kit was enough for me. The manufacturer has clearly designed the kit for also experimenting with your own software/configurations. This kit requires PSoC Designer for development and PSoC Programmer for programming if you want to try your own firmware development.