Public transportation in Helsinki and cities near it (Espoo, Vantaa etc..) use a card for payments. This card is called HSL matkakortti and it is based on RFID technology. I heard that it would be possible to read those cards with NFC enabled Android phone. I was recommended to try the following useful applications: Matkakortinluku and HSL live data

Matkakortinluku program says it costs 0.99 Euros and it is based on free source code released on GPLv3. When this is GPL program, it is probable that there are also other applications on Play shop. I did a little search and found free alternatives Matkakortin lukija ilmainen by M.Salomaa and HSL-lukija.

I installed Matkakortin lukija ilmainen by M.Salomaa to my phone. It allows easily to read HSL “Matkakortti” -card information with a NFC equipped Android phone: Current balance, season ticket validity. In addition to that the software can read information on recent trips (Last 7 trips. Last value ticket and season ticket trips in detail). The only downside of the program I see are the advertisements that can be sometimes annoying (but that’s the price of the free software). 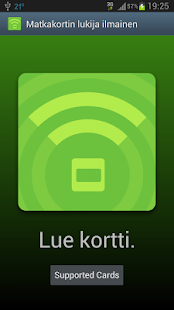 If you care not living near Helsinki Finland, the software could still be of some interest to you, because Matkakortin lukija ilmainen by M.Salomaa supports also some several other cards used all over the world (check the software page for list of supported card types). If you are a RFID hacker, you might want to check the MIFARE public transit cards reader software source code.

When you can read the card, can you hack it? There has been examples of some hacks on this like like one shown atNot fare: Hacker app resets subway card for free rides (w/ Video) article. There was even a video that claimed to be HSL card hack, but was found bogus joke. HSL has systems on their back-office that allows them to detect is someone tries to do something nasty with their cards. There are some plans for web or smart phone based way to charge HSL card sometimes in the future.