PCBs without any substrate

PCBs without any substrate article tells that Kimio Kosaka is taking the concept of free-formed circuits to the next level with O’Baka Project No.7. Arduino Skeleton “0′baka Project” means a stupid project. This project is to make things which is not art and which is not usable. It’s a fully functioning Arduino board, without the board. The traces are there and provide all of the support for the rest of the hardware. You can imagine the fragility of the package. 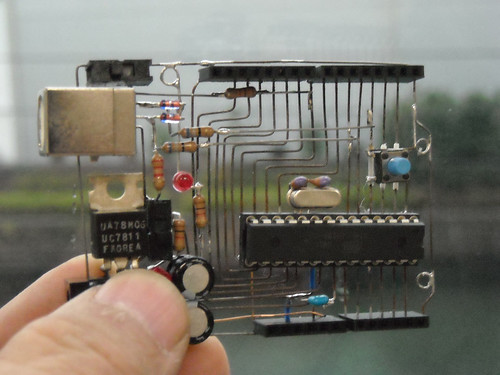 The board you see on the picture is based on Metaboard design. Metaboard is a USB based prototyping board for Atmel’s AVR microcontrollers. It is designed to be (mostly) compatible with Arduino. Its entire design (hardware and firmware) is Open Source. It has low complexity and thus extremely low price. It is designed to be implemented with single sided PCB.