Yesterday Madonna Sticky & Sweet tour had a big concert in Helsinki. It was the biggest ever show held on Northern European countries and biggest on the whole Madonna tour. There was 85 000 people watching it. The show was two-hour multimedia blockbuster. It was a fantastic show to see. The choreography, visuals and live talent were world class and mind-blowingly well executed. Madonna performed great. How does a 50-year old mother of three have so much freakin’ energy!

Lots of technology was used to run the show. Madonna shows have earlier used new ways to manipulate and display video content and this show really mastered the multiple displays. I did not count, but there were very many of them on the show. Of course there were lots of intelligent lighting instruments and also some laser effects. Sound technology was as well very cutting edge: iGiCo SD7 Consoles, Sennheiser microphones, line array speaker system etc.. According to Madonna is Sticky & Sweet…and Powered by Mac most parts of eye candy were powered by Apple Mac computers. 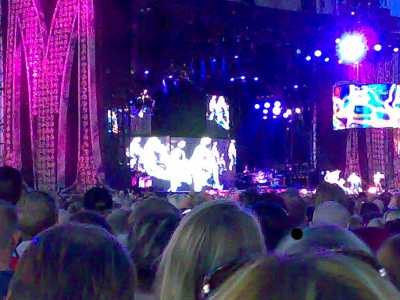