Arduino is an open-source electronics prototyping platform based on flexible, easy-to-use hardware and software. The microcontroller on the Arduino board is programmed using the Arduino programming language (based on Wiring and C) and the Arduino development environment (based on Processing). This combination of tools have made it a very easy to use platform for all kinds of experimenters to create many kinds of project hacks and even commercial products. Why the Arduino Won and Why It’s Here to Stay article gives you idea why the platform is so popular. Arduino and it’s tool-set started with 8-bit Atmel microcontrollers, but nowdays the tools can also be used to program also ARM based microcontrollers.

Every now and then different sources show another “Arduino-like platform”. Here are pointers to some most interesting looking new Arduino platforms (look interesting but I have not had change to personally test any of them):

EDN magazine article Coin-sized Arduino-compatible computer with Bluetooth LE wirelessly connects to smartphones, tablets tells that about the world’s first ‘Arduino’ compatible open-source micro-computer that can communicate wirelessly with any Bluetooth® v4.0 compatible smartphone or tablet. This ‘RFduino’ is based on nRF51822′s powerful on-board 32-bit ARM Cortex M0-based processor. Open Source RF claims that the overriding focus of the RFduino is on building new wireless applications. The RFduino can be powered by anything from household outlets down to a regular CR2032 coin cell (watch) battery. The RFduino 7 GPIO lines all support, Digital IO, Analog ADC, SPI, I2C, UART and PWM. The RFduino is similar to the Arduino UNO or DUE, except the RFduino is a fraction of the cost and size, in addition has wireless smartphone connectivity built-in! There are several open-source RFduino and iPhone apps which are free to use, extend, and share. 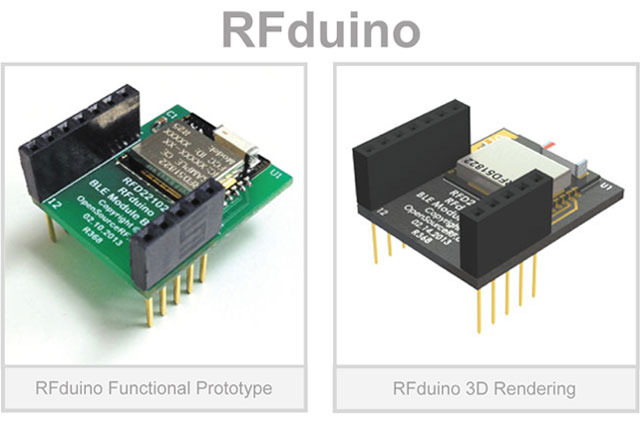 The JeeNode is a small wireless board with an 8-bit Atmel RISC microprocessor. JeeNodes are compatible with the Arduino platform and can be programmed under Windows, Mac OS X, or Linux using sketches created with the Arduino IDE. Kits include the ISM-band 868 MHz radio module as used in Europe for short range wireless communications.

The PICnDuino Review page tells about PICnDuino board. The PICnDuino is an Open Source dual microcontroller development platform built into a tiny direct to USB device. It is compatible with both Arduino (Atmega 328P) and Amicus18 (PIC18F25K20). The PICnDuino provides a fantastic opportunity to learn two programming languages in one device (Arduino which is C and Amicus18 which is Basic). You just plug it in to USB and start coding. The board has LEDss onboard and had bread-board friendly format.