Turn a Tablet into a Signal Generator

Signal generators are a handy thing to have around the lab. In recent years these lab tools have not only decreased in size but also in cost and the result has been a plethora of portable versions that now exist on the market. In addition to full equipment it is nowadays possible to use a smart phone or tablet as a signal generator (just like where you earlier needed a PC).

Turn a smart phone into a signal generator article tells how you can use your iOS or Android smartphone as signal generator. The idea is use a software on the device and connect the speaker output with a suitable cable (3.5 mm stereo plug to few alligator clips) to the circuit you want to test. A standard headphone jack will typically only cover the frequency ranges that a human can hear (20 – 20,000 Hz), but it is enough for many applications. The article has software examples to use for iOS and Android. 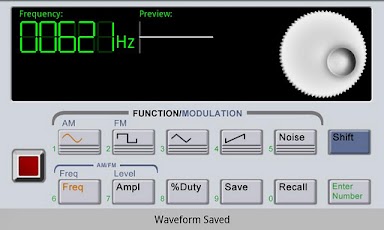 Here are some other signal generation software I found from Google Play:

SoundForm Signal Generator is a free software that generates White and Pink Noise, Sine, Square, Triangle, Ramp waves and Impulses. The software has also an oscilloscope view of the incoming sound (from tablet microphone).

Notes on using a tablet or smart phone as signal source:

The frequency response of the audio output is not usually completely flat. Usually there is some attenuation at the highest and lowest frequencies (how much depends on devices used and maybe also the load you connect to signal source). This means for example that if you do a sweep (common when testing testing audio circuits) you will find a marked change of the amplitude of the waveform as it sweeps.