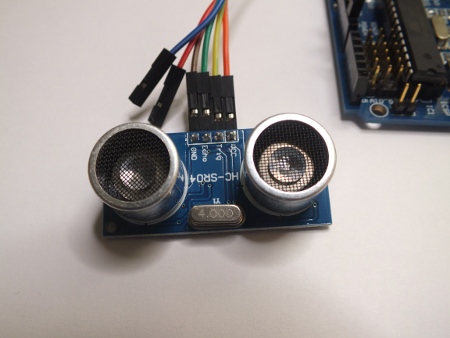 The working principle of the HC-SR04 Ultrasonic Sensor Distance Measuring Module when the module get trigger “start” pulse, it sends eight 40khz square wave pulses and automatically detect whether receive the returning pulse signal. If there is signals returning, through outputting high level and the time of high level continuing is the time of that from the ultrasonic transmitting to receiving. So the pulse length tells the time of flight from sensor to measured distance and back. The HC-SR04 Ultrasonic Sensor Distance Measuring Module was wired to Arduino board with Male to Female DuPont Breadboard Jumper Wires (pretty useful accessory for prototyping with Arduino). 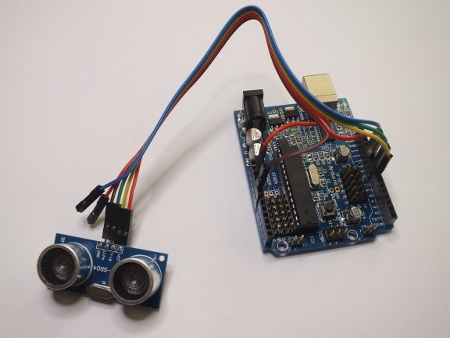 Arduino programming environment contains Ping example made for an ultrasonic range finder from Parallax. It detects the distance of the closest object in front of the sensor (from 2 cm up to 3m). It works by sending out a burst of ultrasound and listening for the echo when it bounces off of an object. The Arduino board sends a short pulse to trigger the detection, then listens for a pulse on the same pin using the pulseIn() function. The duration of this second pulse is equal to the time taken by the ultrasound to travel to the object and back to the sensor. Using the speed of sound, this time can be converted to distance.

The HC-SR04 Ultrasonic Sensor Distance Measuring Module has a little bit different interface, because it had separate pins for trigger and echo. This means that I needed to modify the example source code (was not too hard).

Here is my modified code (over 90% based on Ping example that comes with Arduino IDE 1.0.5):

This sketch reads a PING))) ultrasonic rangefinder and returns the
distance to the closest object in range. To do this, it sends a pulse
to the sensor to initiate a reading, then listens for a pulse
to return. The length of the returning pulse is proportional to
the distance of the object from the sensor.

This example code is in the public domain.

void loop()
{
// establish variables for duration of the ping,
// and the distance result in inches and centimeters:
long duration, inches, cm;

// The same pin is used to read the signal from the PING))): a HIGH
// pulse whose duration is the time (in microseconds) from the sending
// of the ping to the reception of its echo off of an object.
pinMode(pingEchoPin, INPUT);
duration = pulseIn(pingEchoPin, HIGH);

Now time to try to get some graphs. This could be down in many ways, for example using Processing like in Graph example, Realtime Plot of Arduino Serial Data Using Python, Graphing with Excel or use application specifically made for this like SerialChart.

SerialChart is an open source application for charting data sent via RS-232 port in real time. I had used the software earlier successfully, read the documentation and checked SerialChart Tutorial, but for some reason I could not get data from Arduino that was mapped to COM11. I finally found that I had the same issue issue that was mentioned at Serial chart says that the com port is busy when its not page:

This a problem that comes from the qt serial library. So I will not be fixing that but as a workaround I want to let you know that you’re not stuck with high-numbered ports that Windows assigns , you can change them to something lower than 10, for example COM7 , COM5

Here is the output I got with SerialChart program:

Now I can visually see what the sensor senses and also see the numeric values.