Robert Moog is considered the inventor of the modern synthesizer.  Robert Moog, inventor of the modern synthesizer, was born on May 23, 1934. Moog is credited with creating the first voltage-controlled subtractive synthesizer to utilize a keyboard as a controller. He demonstrated it at the AES convention in 1964. In the mid-1960s, Dr. Robert Moog unleashed a new universe of sounds into musicdom with his invention of the electronic analog Moog Synthesizer. The Moog synthesizer made a name for itself in the music industry after it was demonstrated at the Monterey International Pop Festival in 1967.

Moog sounds come to define a generation of music, featuring heavily in songs by The Beatles, The Doors, Stevie Wonder, Kraftwerk and many others. Those sounds are still nearly 50 years later, regarded by many professional musicians as the epitome of an electronic instrument. In fact, as renewed interest in these monolithic beasts continues to grow, Moog’s influence on modern music remains as profound as ever. So it is a good idea to take a look at Bob Moog’s Beautifully Intricate Drawings of Synth Circuits. You can find them at Bob Moog Foundation schematics section.

Few years ago Google made for Robert Moog’s 78th Birthday this interactive Moog synthetizer simulator on your browser. The sound is generated natively using the Web Audio API. This doodle also takes advantage of JavaScript,Closure libraries, CSS3 and tools like Google Web Fonts, the Google+ API, the Google URL Shortener and App Engine. 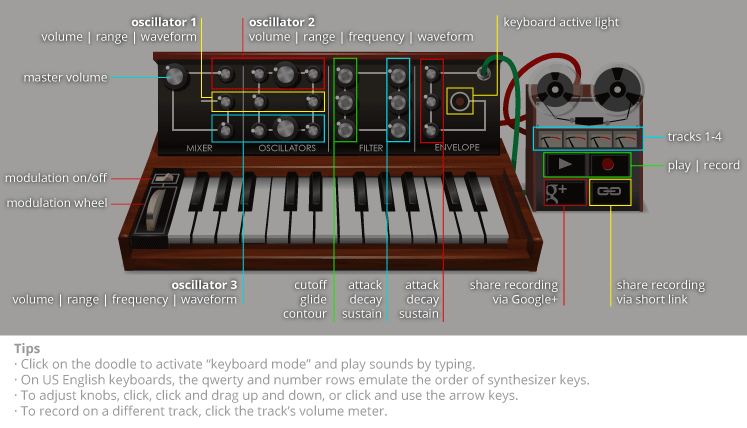 The 14 synthesizers that shaped modern music

Make music in your browser