Last year BBC introduced Micro:bit development board  Intended to allow children to get creative with technology. The Micro:bit is one of the cornerstones of the BBC’s “Make it Digital” campaign. With Micro:bit BBC tries to get a million preteens into embedded development world as Micro:bit will be given to every 11 or 12 year old child across the UK, for free. BBC micro:bit is aimed for all sorts of cool creations, from robots to musical instruments.

There are already a lot of low-cost, small-sized developing card, like Arduino, Raspberry Pi, ESP8266 NodeMCU, CodeBug .. and many other Dev Boards. So why does the world need another new educational development board?

In some way you could compare the idea to famous Raspberry Pi board, but this Micro:bit is aimed to be cheaper and even easier to program. Where Raspberry Pi is a full computer, Micro:bit could be more compared to an Arduino board or IoT device with limited resources but with built-in features like LED display and sensors. The technical specifications for the board will also be open-sourced, and a not-for-profit company will oversee future development. There is a large number of product partners, web site with on-line development tools, the board is distributed to million preteens and $19 Micro:bit computer is now available also as commercial product.Product partners in technology include:  ARM (mbed hardware, software development kits),  Microsoft (TouchDevelop web-based programming tools), Nordic Semiconductor (main processor and enabled Bluetooth Smart) and Samsung (connecting to phones and tablets with the Android app). So it seems that it has already found it’s path on the crowded dev board market.

Micro:bit board is based around an ARM Cortex M0 processor and features a programmable array of 25 red LEDs, two programmable buttons and a built-in accelerometer and magnetometer. It is designed to be powered with two AA batteries or though USB. Here is picture of 50x40mm Micro:bit board from Micro:bit web site:

For connections on the bottom of the board in the picture are five rings which work with crocodile clips or 4mm banana plugs. Those can be used to attach more sensors including thermometers, moisture sensors, proximity sensors and more. The entire edge of the Micro Bit is a ‘standard’ edge connector and it can be used also for output signals: 23-pin edge connector with two or three PWM outputs, six to 17 GPIO pins (depending on configuration), six analog inputs, serial I/O, SPI, and I²C.

What is the price? For school kids the price is £0, and for everyone else £15.The BBC Micro Bit is now available to pre-order from distributors including Kitronik, Pimoroni, Science Scope, Tech Will Save Us and The Pi Hut. The first paid-for micro:bits will ship in July 2016.

How do you program the BBC Micro Bit?

Kids will be able to program the Micro Bit via a web-based editing environment.The available languaghes are JavaScript, Python (MicroPython), C++, Blocks (a visual programming language) and Microsoft’s Touch Develop language (visual + code). There is on-line web based editing enviroment that runs on PC, tablet and smartphone. Once a program is finished it can be saved and sent to a server which compiles the program into the code the Micro Bit can understand.The Micro Bit was created using the ARM mbed development kits and the mbed cloud compiler service. The development environments are all accessible through the micro:bit website, on which no login is required for writing code.

The Micro Bit can act like a USB flash drive when connected to a PC, so programs can be dragged and dropped onto it. Or compiled program can be transferred wirelessly via Bluetooth to the Micro Bit

On clicking the “Create code” button you are presented with a choice of four, Code Kingdoms JavaScript, Microsoft Block Editor, Microsoft Touch Develop, and Python. For exmaple this Blocks aditor provides you Micro:bit emulator that allows you to test your code without real hardware: 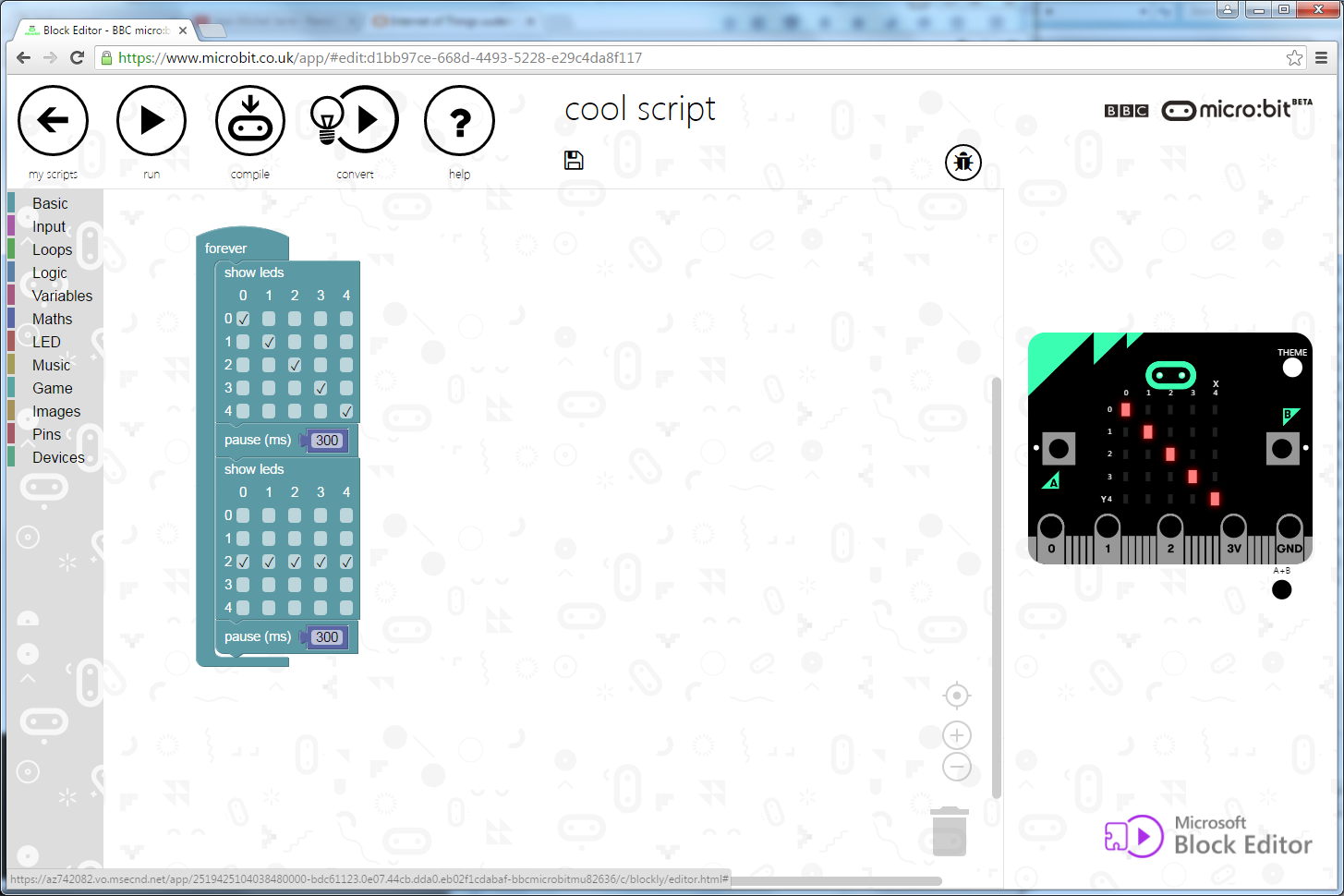 JavaScript also has visual look and Micro:bit emulator in it: 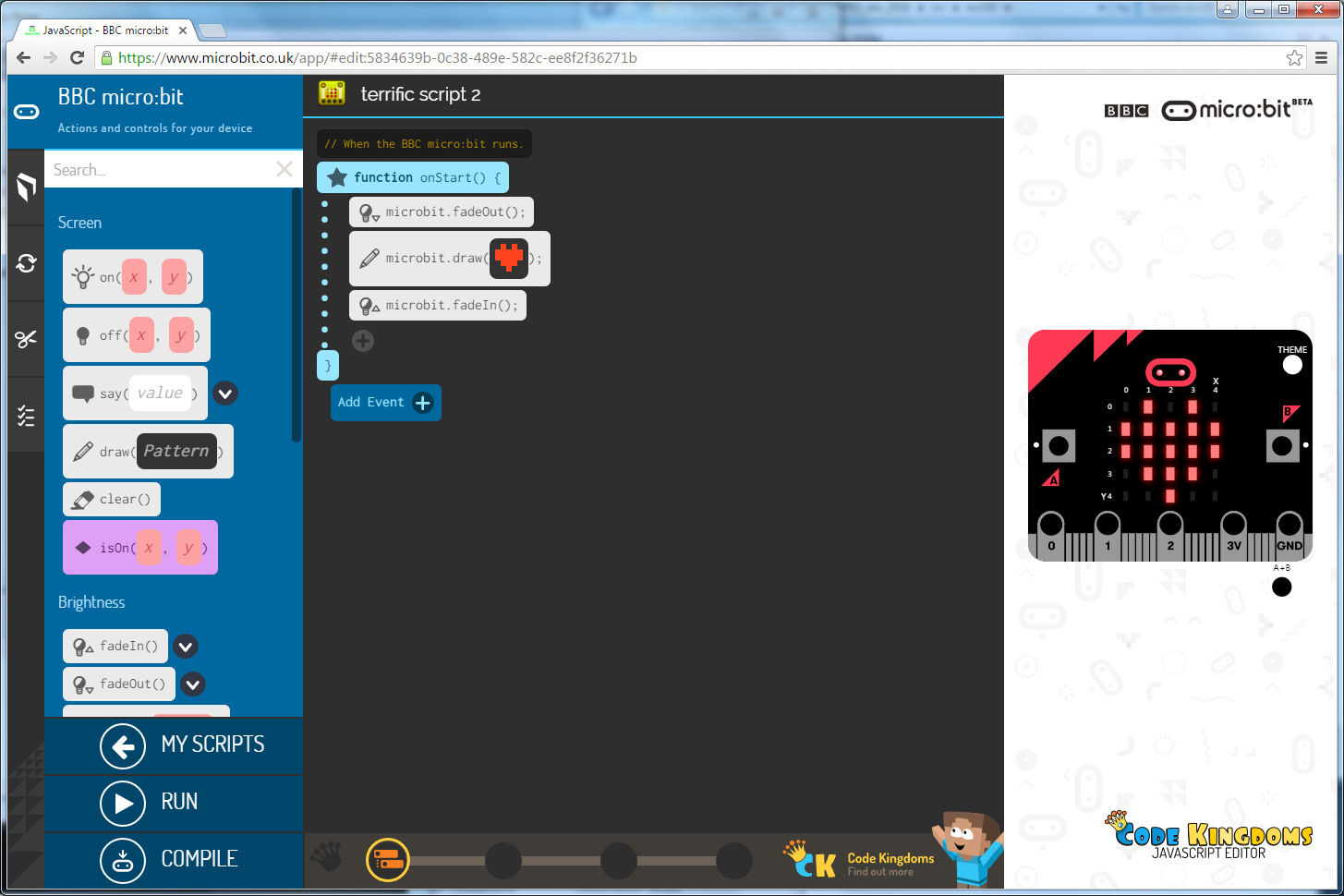 What to do with this board? Your imagination is the limit. Example projects:

For example one  School launches BBC micro:bit into space!