I got an old HP mixed signal oscilloscope HP54645D. This is over 20 years old test instrument with CRT display. The 54645D is a 100 MHz, 2+16 channel Mixed Signal Oscilloscope from Agilent. Measure voltage or current signals over time in an electronic circuit or component to display amplitude, frequency, rise time, etc. Applications include troubleshooting, production test, and design. 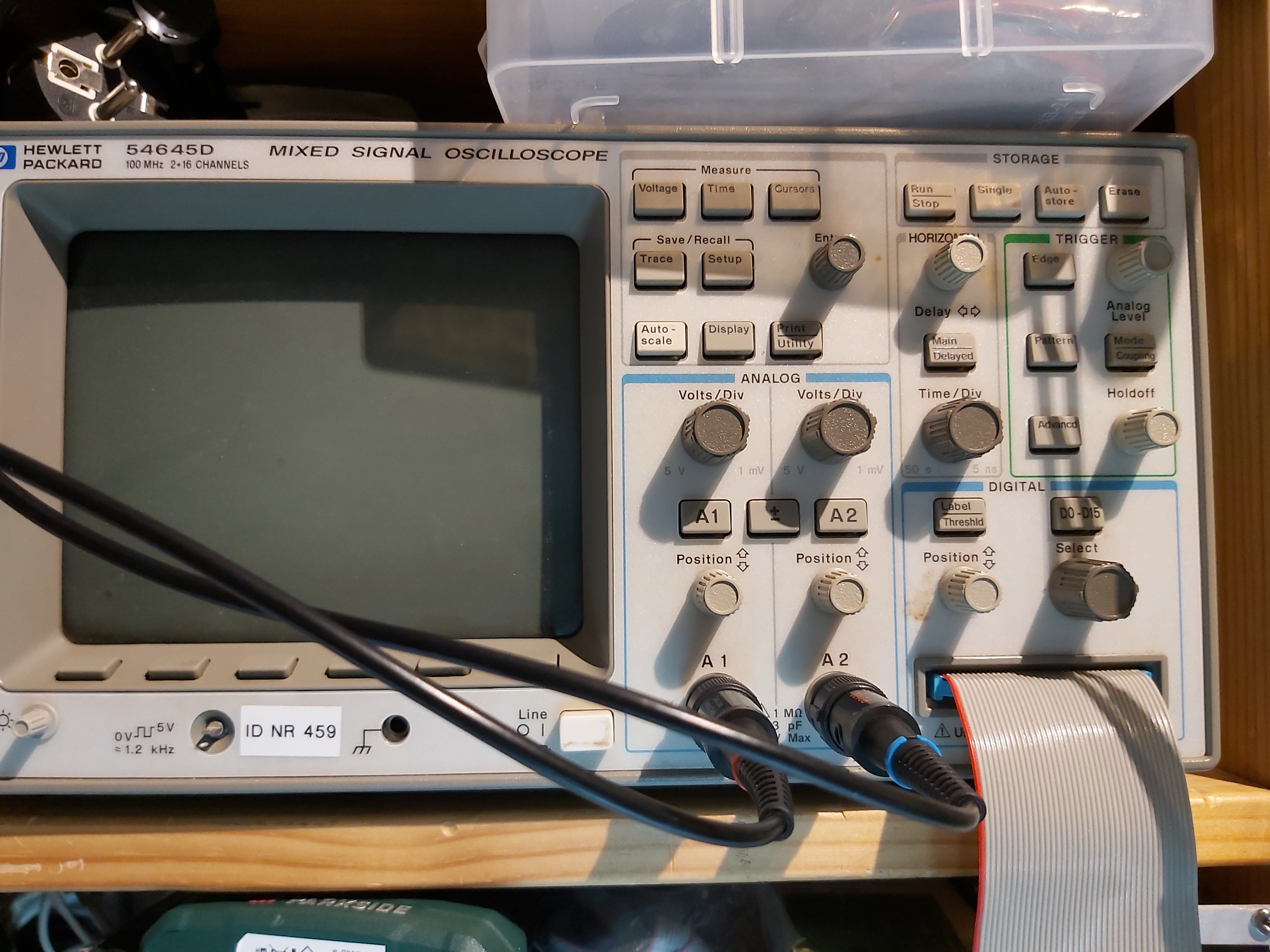 The 54645 was the first of the ones with MegaZoom so it has 4 megapoints memory both on analog AND digital combined. Megazoom is , apart from the large memory, basically a huge resampling asic that resamples the ‘slot’ you define in the memory and creates a 540 pixel wide image to screen.

Unfortunately I received the device without any cables. The oscilloscope probes are easy and cheap to buy. The bigger problem is the right cable for the logic analyzer channels. The device has 40 pin connector for 16 channels. The device says that you should only use recommended cables. O fear I’d take more effort and money to find the right pod for my scope than to buy a separate analyzer.

But I don’t give up. So I started to look for information how to get or build the right cables. I found the following pinout of 40 pin HP logic analyzer connector posted EEVblog Electronics Community Forum. 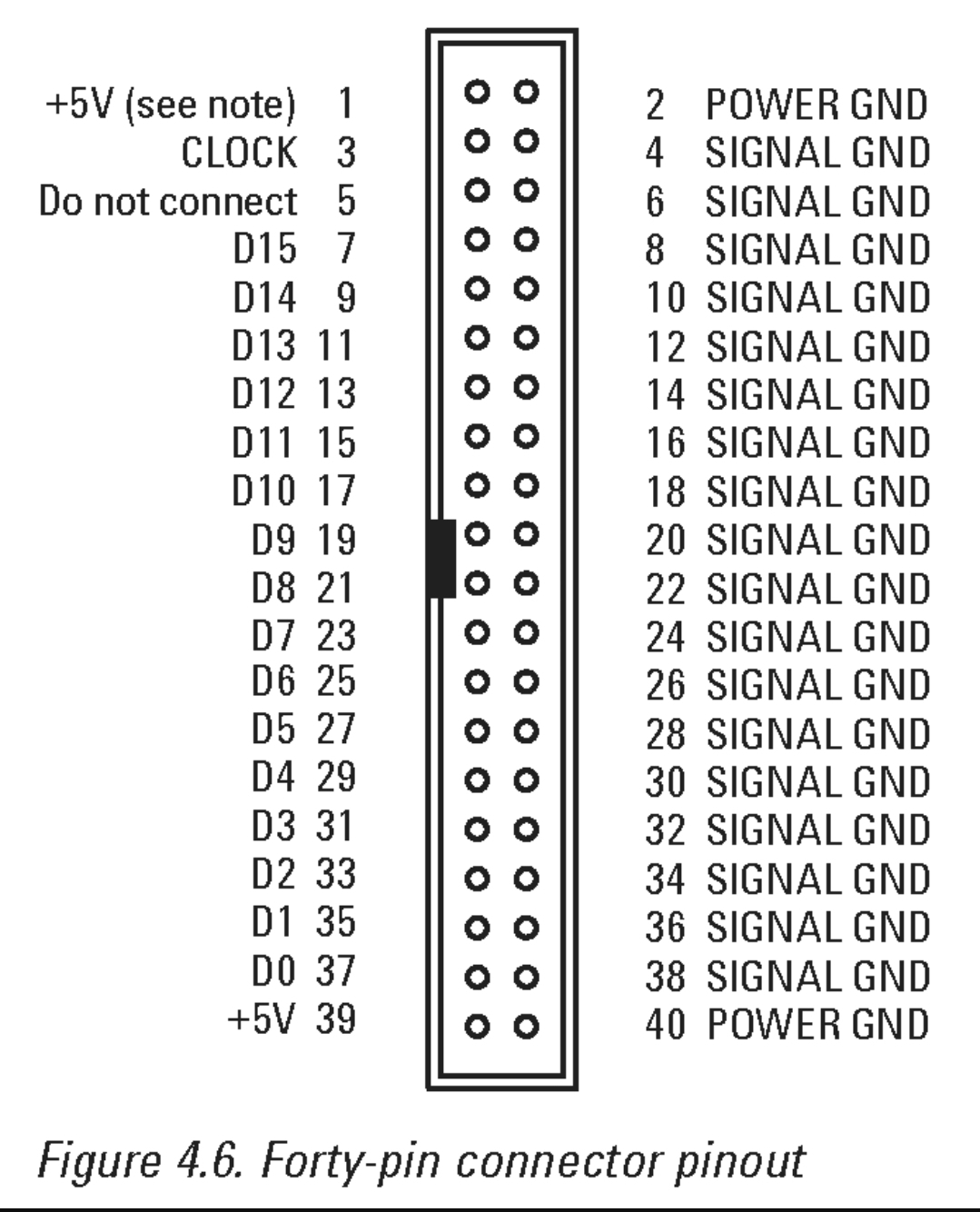 Even through the pinout was listed to be different device, HP has used pretty much identical pinouts on many different logic analyzer products and seemed to have cable sets that work with many different device models. That pinout above seems to match what I have in my device at least for data channel and ground pin usage.

The next thing is what else than just the cable there is. Discussion at EEVblog tells about the probes: They are not active, but do have components inside – simple RC networks. You can improvise with ribbon cable & resistors if necessary. Nothing in the box.

A few passives in each probe cable.

There is some material on probes for other HP model at https://www.eevblog.com/forum/projects/hp-e2310a-logicdart-probes-how-to-build-your-own-probes/

The description above clearly states that a resistive transmission line is used. Maybe I could live without one with somewhat reduced performance. At least I can plug 40 pin flat cable with connector to the connector on the front panel. And if I connect some logic signal to the right pins (from scope front panel test pin) I can get the logic analyzer to react to them. With more testing it seems that the voltage levels to what the scope reacts are not exactly the ones that I expect them to be (the scope turns on digital signal at considerably lower voltage than I expect it should).

There must be some tricks going on the cable or at the probe end. Could they be something like oscilloscope probes? The A wideband 1:21 DIY 1 kΩ oscilloscope probe article has the following description on scope probe suitability for logic analyzers:
If you have used conventional 1:10 oscilloscope probes to measure logic signals, you probably know that they have several limitations when edge rate falls. As logic signals get all the time faster, those ordinary probes become less and less useful. The main problem with 1:10 probes is their capacitive loading. At DC, the input impedance of 1:10 probe is 10 MΩ. 10 MΩ is a good thing when measuring high-impedance DC circuits like vacuum-tube amplifiers. For digital circuits, this figure is meaningless. It is the AC-loading which matters. Typical load capacitance value for 1:10 probe is 10-20 pF. At 100 MHz and 10 pF, that equals to 159 ohms. At 1 GHz, impedance is only one tenth of that figure, 15.9Ω!

So it seems that what is uses is different than normal oscilloscope probes. After some googling I found the following picture at https://www.eevblog.com/forum/testgear/diy-logic-analyzer-probe-and-pods-for-siglent-scopes/

That gives the idea what there could be. But it would be better if I could find some information from the right manufacturer. HP measuring equipment company is now called Keysight, and they have a relevant document at https://www.keysight.com/fi/en/assets/7018-06707/data-sheets/5968-4632.pdf

The document has some technical material on Keysight/HP 40 pin logic probes. There is this very good descriptive circuit diagram on the probe operation:

For testing purposes I built one test circuit that used 250 ohms resistor, 100 kohms resistor and 8 pF capacitor. It seemed to work somewhat acceptably on signal levels and also quite fast signals got though. Next plan is to built some more of those probe networks and do more testing. Here are my first channels wired with flat cable to the mixed signal scope.

In ended this experimenting with DIY cable when I got my hands to an original probe cable.