The ZX Spectrum is 30 years old. Sinclair ZX Spectrum 30th Anniversary is today. Happy birthday Spec. ZX Spectrum, the microcomputer launched in 1982 by Sinclair Research (Cambridge, UK) is seen by many today as the inspiration for a generation of eager young programmers, software and game designers in the UK. It has inspired many people also outside UK, including me. My first computer was Sinclair ZX spectrum. The successor to Sir Clive Sinclair’s ZX81 – at the time the world’s best selling consumer computer – it introduced colour “high resolution” graphics and sound. The design was sleeker than anything else on the market and price was good too. That allowed adverts at the time to boast: “Less than half the price of its nearest competitor- and more powerful”. ZX Spectrum’s chief designers reunited 30 years on article gives some background how this computer was created. Read also Happy 30th Birthday, Sinclair ZX Spectrum – The story of an historic micro. 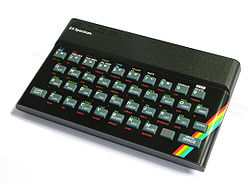 I remember starting my ZX Spectrum computing 1983 by first playing Jetpac game that was cool game at the time (check Jet Pack remake for web browser if you want to try). I remember playing that game so much that quite shortly I broke down the keyboard because of too much playing. After some time I started programming, first with built-in Basic. Later also Assembler (the manual had the assembler commands and their coded listed on the end which was cool) and some other languages. Then I did also some hardware hacking, including installing a better keyboard and adding my own joystick interface to it (my own design compatible with Interface 2 joysticks). It 80′s was fun hacking time.