I saw yesterday an interesting new web-based, graphical programming editor. Google Blockly — a Language With a Difference tells about a new Scratch-like graphical language, Blockly. You program with it by dragging and dropping code blocks onto a design surface.

Blockly is written in JavaScript and runs inside web browser. All the code is free and open source. This means it can be included in any web page or web app very easily. It can be customized to allow end users to program web apps. Blockly is a graphical editor that may be used as part of larger application. It can be used for education, getting people to learn to program, or as an easy-to-use script generator for the app. Novice programmers are fighting two battles at once: the fight to translate their ideas into logical statements, and the fight to keep the syntax legal. Blockly makes it completely impossible to make a syntax error.

Blockly can compile its programs to JavaScript, Dart, Python or XML so you can take the script and develop it further. This is a really good idea. Google Blockly – A Graphical Language with a Difference article give some more details on this new programming language. 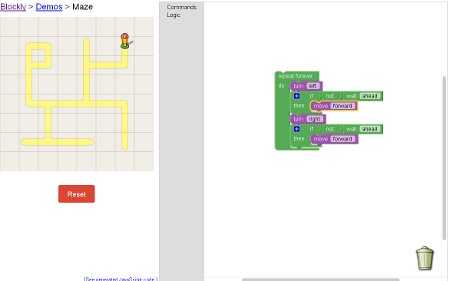 Here is larger view of the control logic and JavaScript code generated from it: 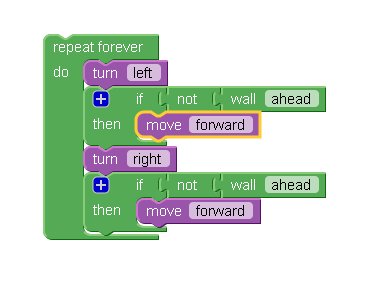 This solved supplied example the maze “by accident”.

Here is improved logic that follows the right side wall… 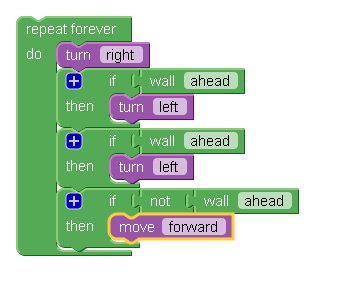 Blocky is an interesting project. Blockly is currently in its early stages of development and at the moment at least it is only suitable for generating short scripts.

Blockly is a really interesting idea and it could do a lot for both beginners and programmers who want to create quick prototypes or include a scripting element in their web apps. I think it could be useful for implementing some simple scripts, but like many other visual programming environments the graphical representation of program usually becomes quickly huge when things you try to do get more complicated. Visual programming environments are still evolving, but I don’t see them replacing the traditional code writing in general any time soon.