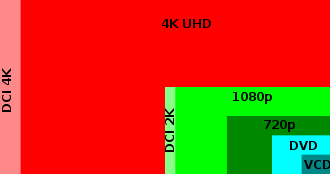 The push for 4K resolution for consumers is quite new thing. Press started to write about 4K UHD next generation resolution actively in 2012.  4K / UltraHD was introduced to wide audience in CES 2013 (earlier it was pretty much only digital movie theater technology), and the manufacturers start to push it more in 2014 because all LCD makers are looking to move their business models on from cheap mass production to higher-margin, premium offerings. They try to innovate and secure their future viability by selling fewer, but more profitable displays. 4K is high-end and expensive, but the prices are going down. 4K displays will put high-end home theater systems roughly on a par with the state-of-the-art Digital Cinema projectors used in many commercial movie theaters.

Last year (2013) 4K was not ready for wide use. 4K resolution ecosystem will get more ready for wide use in 2014, bit it will still require a lot of work “with the compression and decode capability” to be ready for mainstream use. There are a many things that need to happen before 4K really becomes widely used. 4K TVs and monitors are available. PC hardware with 4G capable graphics cards is already available. Mobile phones and tablets with 4G capabilities are also demonstrated. There are video cameras, digital cameras and even smart phones that can shoot 4K video. 4K and 4K streaming are definitely coming in 2014 regardless of how many people can actually view it.

To support 4K resolution, new high speed interfaces needs to be defined. Uncompressed 4K UHD at  30 frames per second need about 6 Gbit/s bandwidth (3840 * 2160 * 3 * 8 * 30  = 5.97 Gbit/s) . This a a lot of bandwidth, more than many commonly used video interfaces like HDMI and HD-SDI have. So there are technical challenges and need for new interfaces. The HDMI 1.4 specification adds support for extremely high video resolutions that go far beyond today’s 1080p systems, including 4K resolution. Just about every TV maker showing off 4K sets at the Consumer Electronics Show (CES) 2014, but there’s no guarantee it’ll decode correctly on every TV.

Video production environments like ones used in TV studios need also updated interfaces.  Addressing timing challenges in 6G-SDI, UHD video applications article tells that continued innovation in 4K digital cinema and ultra-high definition (UHD) television increases the need for low-jitter, high-performance timing solutions, that are needed to enable the market transition to 6 Gbit/sec and faster data rates. 4K UHD can be transmitted at 30 frames per second needs the video payload at 5.97 Gbit/sec. Although the SMPTE body has yet to ratify a standard for 6G-SDI, video equipment suppliers are already meeting the demand for 4K by introducing solutions to support the faster data rates. 6G-SDI allows trasmitting UHD video over standard BNC cable but has still a limitations: 4K UHD can be transmitted at maximum 30 frames per second. Higher data rates are required to transmit video at higher frame rates, so some manufacturers are starting to release 12G-SDI components that support data rates of 11.8 Gbit/sec. SMPTE has assembled a new Working Group to define UHD  SDI interfaces with nominal link rates of 6 Gbit/sec, 12 Gbit/sec/s and 24 Gbit/sec.

When it comes to the standards in getting the 4K content to the consumer screens, then there is a lack of well defined standards as well. If you’re hoping for 4K from Blu-ray, you’ll be waiting a while, because there is no defined standard for that. There is no standard for airwaves either. Technically it could be possible to fit two UHD channels in a 45Mbps mux or transponder stream using H.264 compression, and using more advanced H.265 video compression as little as 13Mbps may be sufficient for a 4K broadcast (test transmission set up at CES 2014 used 27Mbps H.265 codec over DVB-T2 to deliver 4K images).

Streaming seems to be the most promising way to get get 4K video to the screen. You will need a fast enough broadband connection and devices that can be used to view the content. The standardization is still on the way (competition on codecs and services), but there are services that use 4K video nowadays. YouTube enabled 4K video support in the middle of 2010 (check some examples of YouTube 4K videos).YouTube and Vimeo allow a maximum upload resolution of 4096×3072 pixels (12.6 megapixels, aspect ratio 4:3). Netflix is testing out 4K video streaming. A 4K stream on Netflix will need a 15Mbps connection (falling back to normal HD at around 11Mpbs). Netflix says it will be using the H.265 codec – aka HEVC – for its 4K service. Many users have already fast enough fixed broadband connection, but can the networks handle peak usage 4K streaming? To get 4K video to your screen you’re going to need a pretty decent net connection – and neighbours who aren’t all trying to do the same thing all at the same time.

The content streaming service providers that produce their own content seem to be serious in their 4K plans. Netflix’s House of Cards was shot in 4K. Amazon Studios also just recently announced that it will shoot all of its 2014 shows in that format as well.