Under the 110 kV power line

Radiation is the emission or sending out of energy from any source. Generating, transmitting, distributing, and using electricity all expose people to ELF radiation. Power lines, household wiring, and any device that uses electricity can generate ELF radiation. How much electromagnetic radiation you are exposed to depends on the strength of the electromagnetic field, your distance from the source of the field, and the length of time you are exposed. Several large studies have looked at the possible effects of ELF magnetic fields on cancer in rats and mice with fields much stronger than what people are normally exposed to at home ranging from 2 to 5000 microtesla (µT). Scientific evidence suggesting that ELF exposure poses a health risk is “weak“.

It’s not clear that exposure to ELF radiation is harmful. People who are concerned about ELF radiation exposure from high-power electrical lines should keep in mind that the intensity of any exposure goes down significantly as you get farther away from the source.

Where there is more than one current forming part of one or more electrical circuits (like in typical three phase overhead power line), there is also partial cancellation between the magnetic fields and partial cancellation between the electric fields produced by the voltages on individual conductors. Cancellation depends on the way the wires are located in relation to your location and generally becomes better at greater distances. To get ideas of field levels involved take a look at Average fields at various distances from high-voltage power lines data.

In some cases the electromagnetic field surrounding the power lines is enough to make fluorescent tubes glow.
There are videos that show how you can Light up a Bulb Under High Voltage Power Lines

Abnormal phenomenon under a high voltage PTL – LIGHTING BULBS RIGHT IN MY HANDS without any wires!!!

The effect of the electrical field under very high voltage line has also been used to create art.
“
The image below shows an example of electrostatic coupling as mentioned by Ilmari Karonen. Note that the site where this photos first appeared and others relating to fluorescent tube lighting frequently refer to electromagnetic coupling. Ibn fact (as far as I know) what is incolved is electrostatic or capacitive coupling. ” 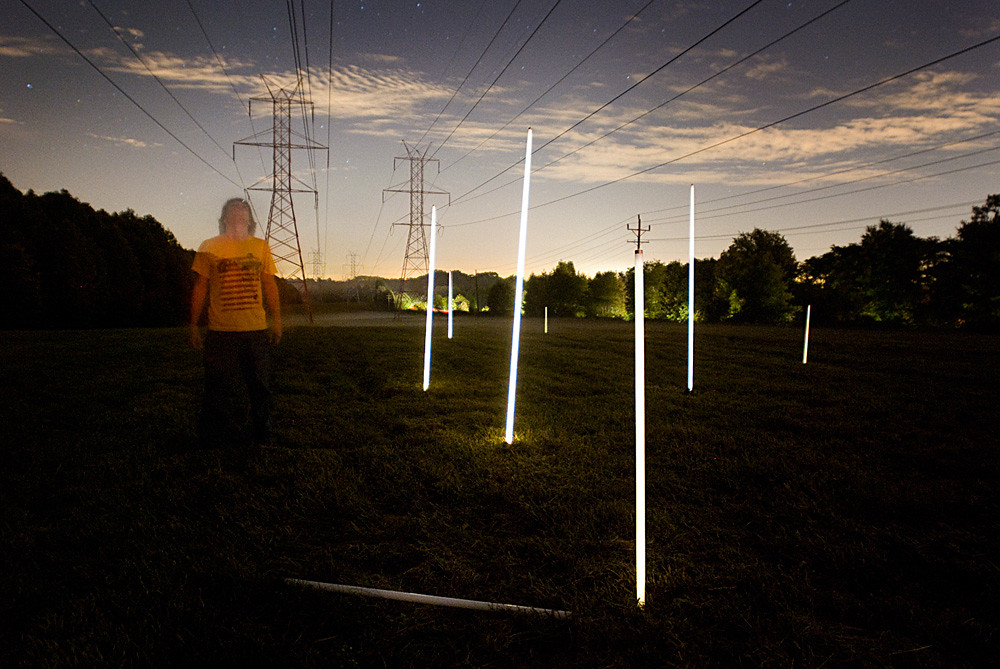 If in some cases the electrical field is enough to light a bulb, can it cause electrical shock? Daily Mail magazine wrote:
Cyclists who ride beneath overhead power lines occasionally suffer a small electric shock, according to the National Grid. So-called ‘micro shocks’ can happen when a cyclist passes through the electrical field surrounding a power line and picks up a small electric charge. In some cases on some conditions it might be possible to feels some shocks, but not always and everywhere near power line.

When there is a lot of material and different views on the electrical and magnetic fields below power line, the best idea is to make yourself some testing to see what is the real situation. Here are two EMF measurements I made near and under the 110 kV power line:

To see what kind of effect an electrical field can cause, I took an umbrella on my hand and walked below a power line (with shoes that had isolating rubber bottom). Then I measured the voltage and current from the umbrella to ground. The umbrella top was at around 2.5 meters from ground during measurements.

Voltage measured with digital multi-meter from the umbrella was 30-40V AC.
The current with multi-meter current range from umbrella only was 1-1.5mA AC.
When I touched the umbrella (so human+umbrella) I got up to 2 mA AC reading at current range and 15-20V at voltage range.
The magnetic field with EMF meter was around 4 uT and electrical field more then 1999 V/m (maximum EMF meter reading).

Could you steal power from the power line this way? Maybe a little but nothing significant near the ground. With my umbrella I could maybe able to get 1 mA at 10V or so maximum form umbrella, meaning theoretically 10 mW or less.

There are some “Free Energy” or “Radiant Energy” cell phone charger video that claim to uses high tension power lines to charge cell phones. High tension power lines give off electric fields as well as electromagnetic fields, but according to my measurements on my case not that much that those claims would be possible (maybe at some other countries field are much stronger). Enjoy the videos but take the claims with grain of salt.

Charging from the power lines.

Theoretically you could get somewhat more power if you get more near to line, but Messing with the high voltage power line and its proximity is very dangerous, potentially lethal and most certainly illegal. There are stories of people stealing power from power lines, but it is practically pretty hard to steal any considerable amount of power without needing huge set-ups and being noticed.