Since there is tremendous price pressure on PC’s and other consumer electronics devices, there is great pressure for a low-cost power supply, which often means several things. Low-cost components with limited life are often used, circuit components that might limit secondary failures are left out, and parts are often used at or beyond their ratings, causing poor reliability and short life.

The changes in performance over time can be described as follows: Eventually, the capacitance begins to drop off and internal resistance (ESR) starts to increase. The loss in capacitor begins to increase, causing it to heat up more and go bad more quickly. Finally, at the end of the life span, the capacitor enters an open circuit mode as the dielectric dries up. More details can be found at Reliabity of Aluminum Elecrolytic Capacitors document.

The capacitor plague involved the common premature failure of certain brands of electrolytic capacitors used in various electronics equipment, and particularly in motherboards, video cards, compact fluorescent lamp ballasts, LCD monitors, and power supplies of personal computers. The first flawed capacitors were seen in 1999, some bad capacitors were still being sold or integrated into designs as of early 2007. An incorrect electrolyte formula within a faulty capacitor causes the production of hydrogen gas, leading to bulging or deformation of the capacitor’s case, and eventual venting of the electrolyte. 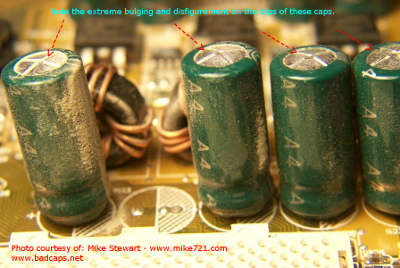 A serious quality control problem is that good and poor quality electrolytic capacitors will often have identical electrical performance when newly fitted. But when the bad capacitors are stressed for a long time with high ripple current in hot environment, their electrical performance changes considerably causing the common premature failure. Most other electronic components which are much less subject to spontaneous failure after assembly.

Criteria for Defining Failures in Aluminum Dielectric Capacitors could be something like this:
1. Considerable changes in capacitance is noticed. A failure is defined as a change in capacitance from the initial capacitance level beyond the specified range. The change is generally ±20% to ±30%.
2. Change in Equivalent Series Resistance (ESR). A failure is defined as the component exceeding the specified range. Usually, this range is 1.5 to 3.0 times the initial value.
3. Change in leakage current. The definition of failure occurs when there is an excess of the specification values.

As you can see measuring the capacitance with a multimeter with capacitance meter functionality does not tell the whole story. It is wise to invest on ESR meter which can test e-caps in or off board. If you like building electronics circuits, you can make your own ESR meter based on An Equivalent Series Resistance Meter plans you can find at http://www.ludens.cl/Electron/esr/esr.html. I have successfully built this circuit and I can tell it works well.

Replacing and reforming electrolytic capacitors was quite common before the current throw-away culture took hold. Some people and companies still repair and replace electrolytic capacitors, but usually it is cheaper to throw broken electronics away than it is to perform preventive maintenance or repair it. To pick electronics that last, look for products that have the longest warranties. Since it is VERY expensive for manufacturers to repair computers and other electronics under warranty, they usually pick parts and de-rating to make sure their product lasts at least as long as the warranty.

Before designing electronics that uses electrolytic capacitors, read Application Guide, Aluminum Electrolytic Capacitors to know how to use them correctly.