Moore’s Law is turning 50 years old. On April 19, 1965, Electronics magazine published a paper in which Gordon Moore made a stunning observation: About every two years, engineers should be able to cram twice as many transistors into the same area of a silicon chip. At its core of the article was a non-intuitive, and incredibly ballsy, prediction that with the advent of microelectronics, computing power would grow dramatically, accompanied by an equally dramatic decrease in cost. At the time of the publication there was no special name for this observation – the name came later. Caltech professor Carver Mead is widely credited with popularizing the phrase “Moore’s Law.” Over the next 50 years, engineers more or less managed to maintain that predicted pace of innovation, delivering dramatically better semiconductors.

Moore’s prediction may have started out as a fairly simple observation of a young industry, but over time it became an expectation and self-fulfilling prophecy as engineers and companies that saw the benefits of Moore’s Law and did their best to keep it going. Gordon Moore now says himself that he formulated “laws” because he saw that the semiconductor industry should go in that direction. Moore’s Law, the greatest impact has been the technology price even lower prices.

This development has had huge effect to everybody. More changes in the world can be traced back to the enabling power of the semiconductor industry than any other industry This development has generated huge value for a large number of companies directly and indirectly: “The market value of the companies across the spectrum of technology driven by Moore’s Law amounted to $13 trillion in 2014,” Hutchison estimated. “Another way to put it is that one-fifth of the asset value in the world’s economy would be wiped out if the integrated circuit had not been invented and Moore’s law never happened” 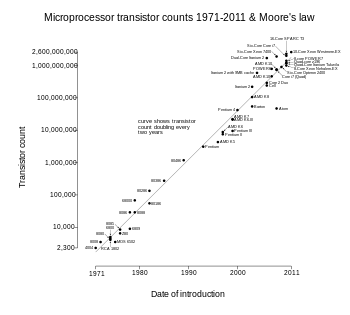 IEEE is running a worth to read special report on “50 Years of Moore’s Law” that considers “the gift that keeps on giving” from different points of view. Chris Mack begins by arguing that nothing about Moore’s Law was inevitable. Another article on the same topic is How Gordon Moore Made “Moore’s Law”. Check also EDN article collection Moore from the Archives and ExtremeTech article Moore’s Law is dead, long live Moore’s Law.