I have earlier written on using DMX-512 controlled dimmer to control mains powered lamps. It works, but is expensive and traditional incandescent lamps are going out of fashion. LEDs are the future, so a cheap easy to use board for controlling low voltage LEDs with DMX-512 signal are needed.

To experiment with LED conrolling I got one 72W 3 Channel DMX512 Encoder Decoder Board Codering Module for RGB LED Stage Light board from Banggood. This cheap (less than $4) board promises to provide gray-scale 0-100% dimming with 256 * 256 * 256 gray-scale. The board is powered from DC12 ~ 24V and can drive up to 72W (2A*3 Channel). This is exactly what is needed to power high power RGB LEDs or RGB LED strip. Connected with DMX512 controller, the controller will follow the effect of changes on generated PWM outputs. Recommended applications are high-power full-color wall wash lights, spot lights, buried lights, underwater lights, stage lights, tunnel lights.

Here is the board (with some cables connected with test clips). 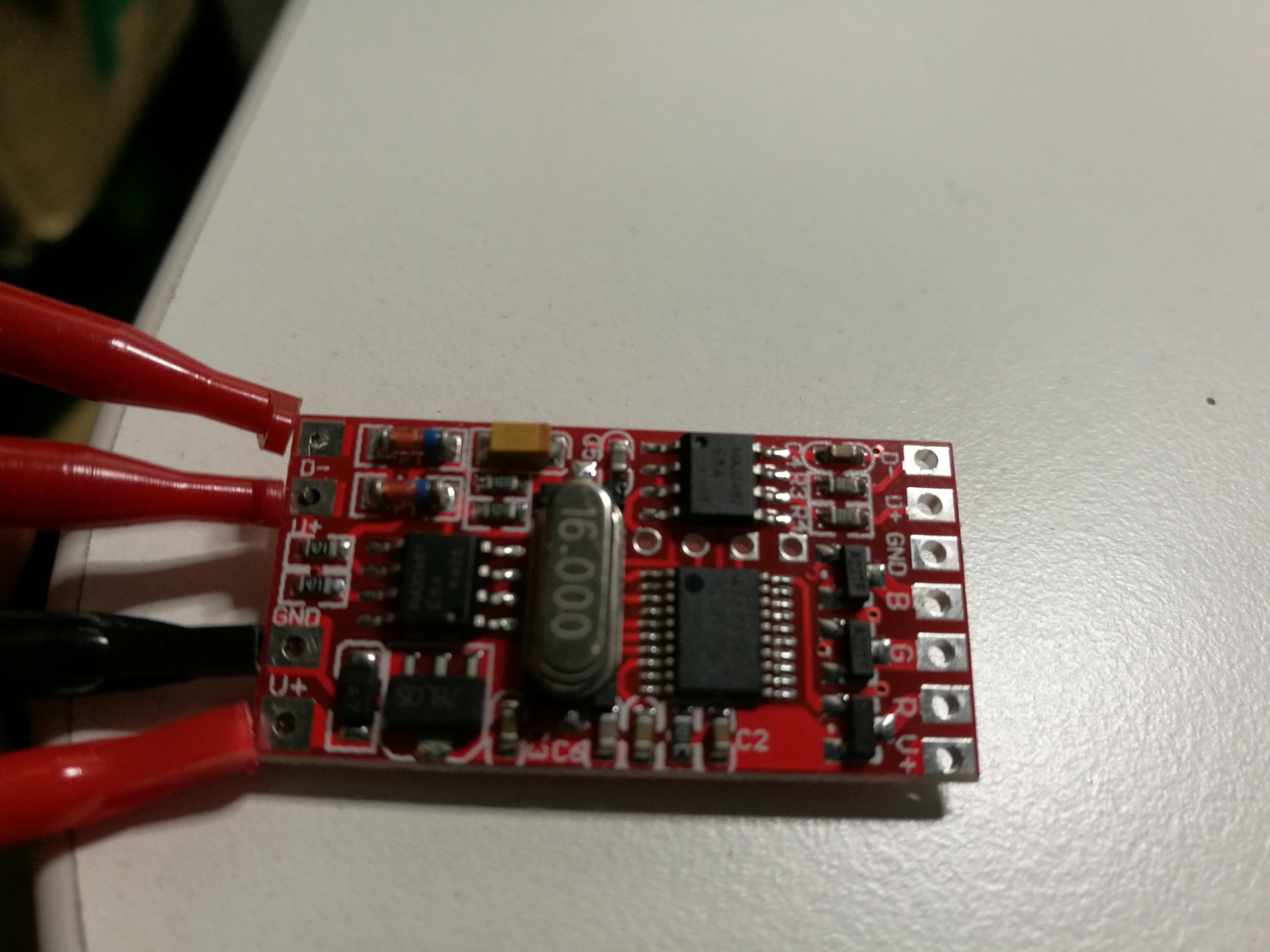 Here is a look at the backside 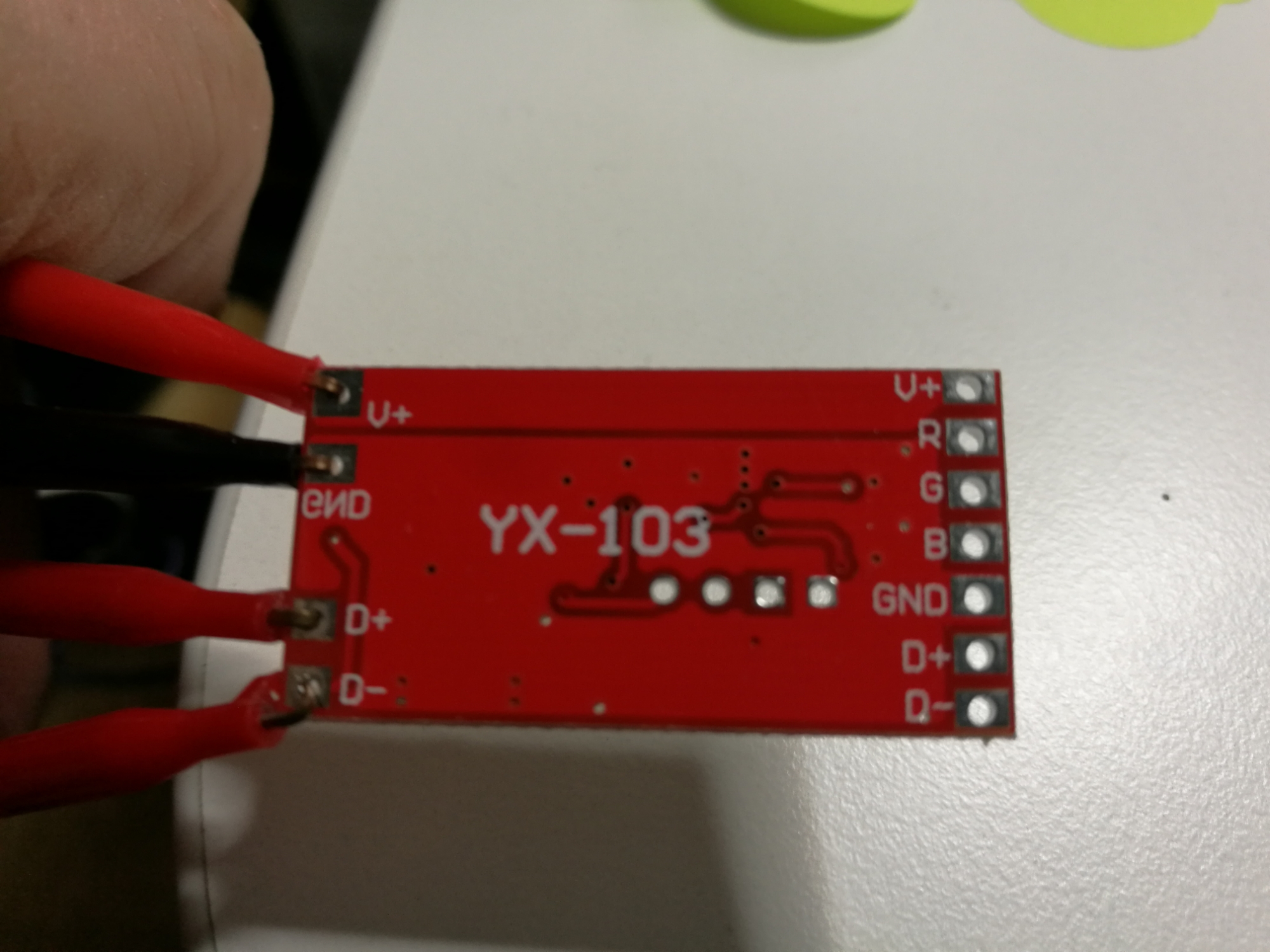 According to the product documentation when not associated DMX512 controller will automatically run the built-in effects (colorful hopping, gradient) – this worked as promised. Next test was to use Q Light Controller Plus software and OpenDMX USB DMX-512 output adapter (same setup as I have successfully used earlier) to control the module.

In this testing I needed some suitable RGB LED to control. I decided to use one RGB LED moduke designed for Arduino I had around (MF DIY RGB SMD LED Module for Funduino). 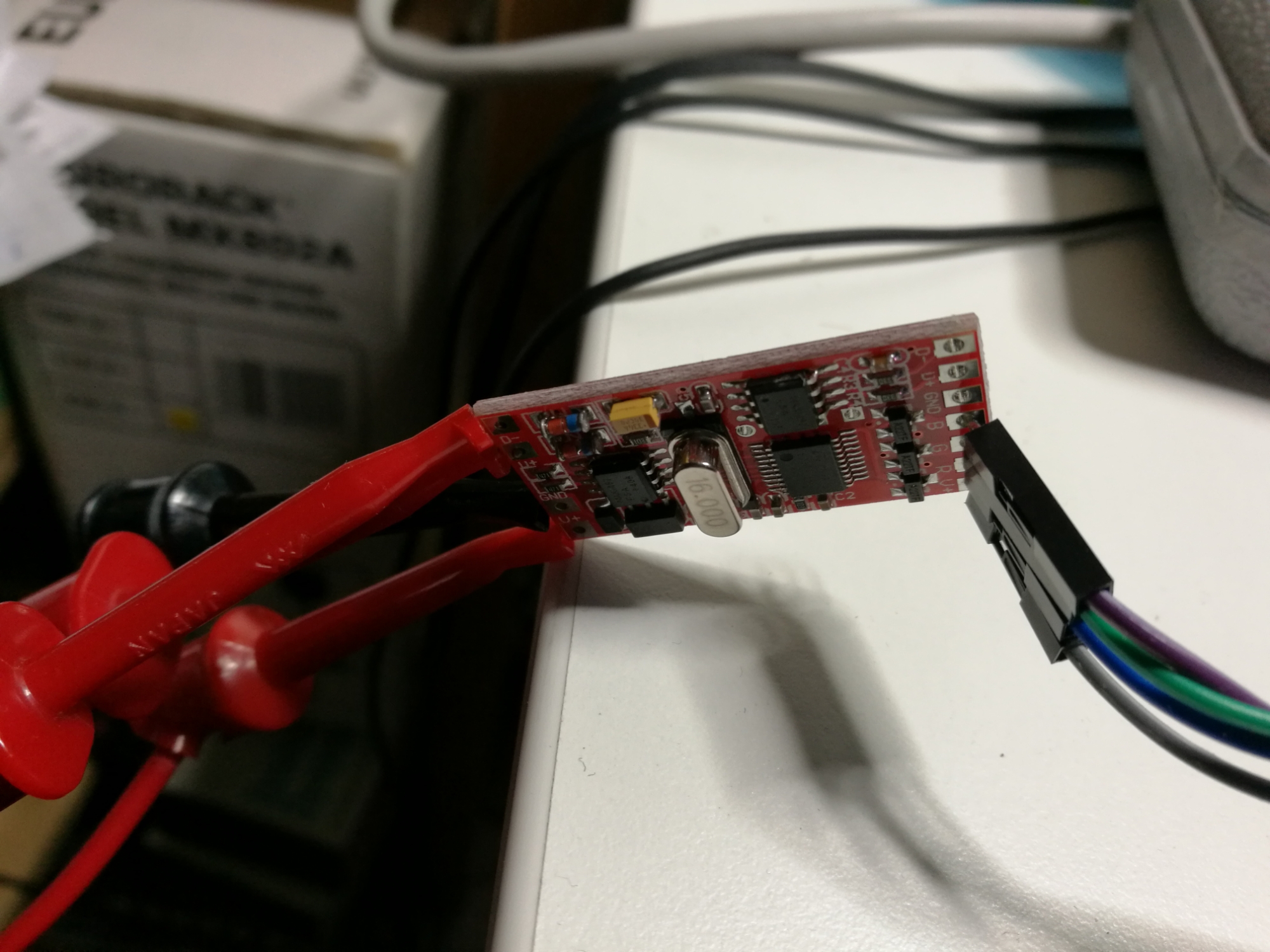 This LED module (MF DIY RGB SMD LED Module for Funduino) is designed to work with 5V Arduino, so running it from 12V  instead of 5V could easily overheat the LED and/or tiny current limiting resistors on board. I finally decided to try my luck by powering theDMX512 Encoder Decoder Board from 8V power supply (the board logic circuits power supply is based on 7805 type regulator, so it should run nicely down to 8V). The testing at 8V was success – both RGB LED and decoder worked well. The decoder board always responds to DMX-512 channels 1-3 (it does not have DMX-512 address switches in it). 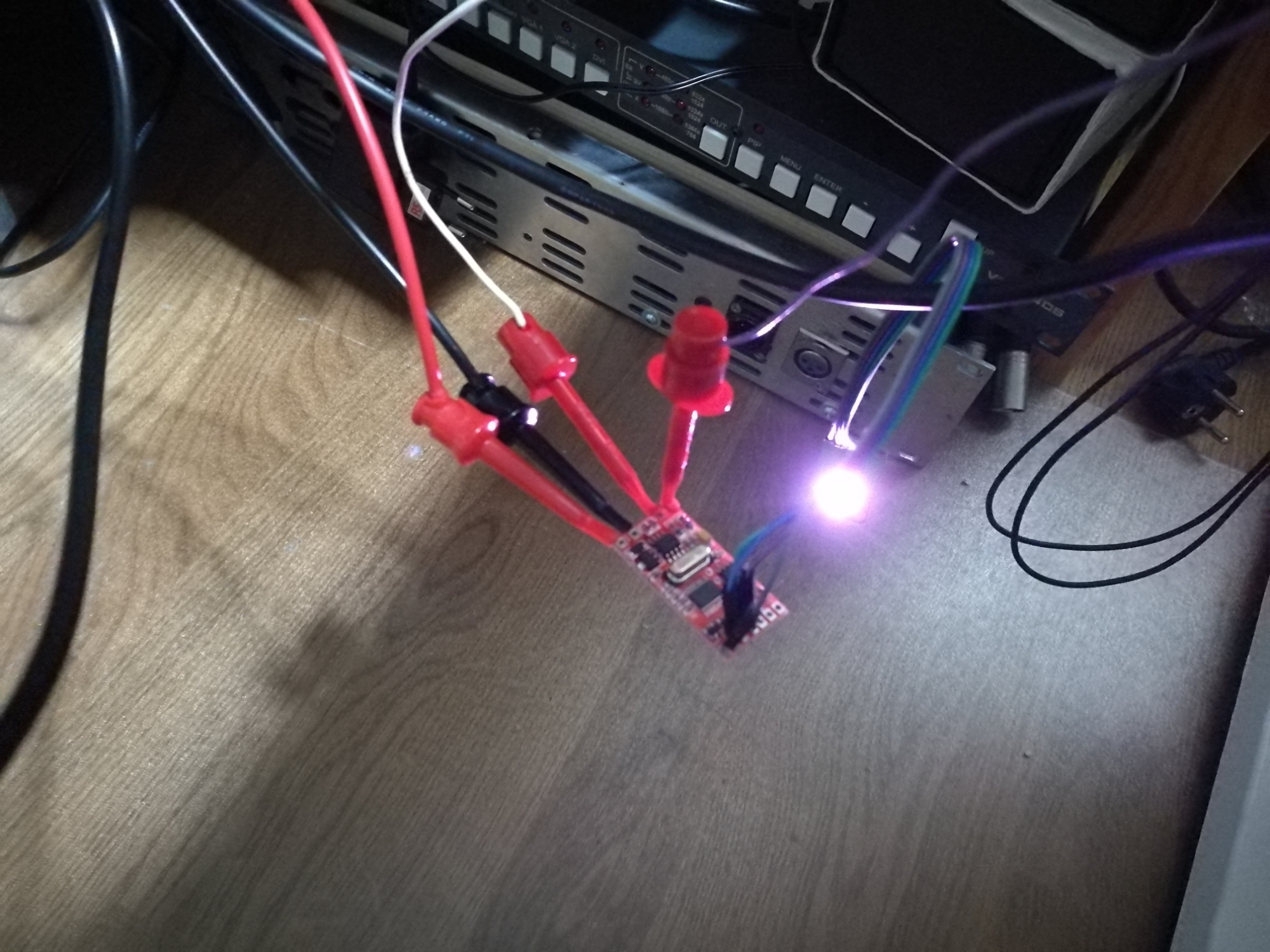 I measured that the LED PWM control frequency is 488 Hz, which should be high enough that you can’t see any flickering on LED dimming.

72W 3 Channel DMX512 Encoder Decoder Board Codering Module for RGB LED Stage Light board page as pretty much all the basic information to get the board working, but there seems to be some things are not entirety right. For example this drawing: 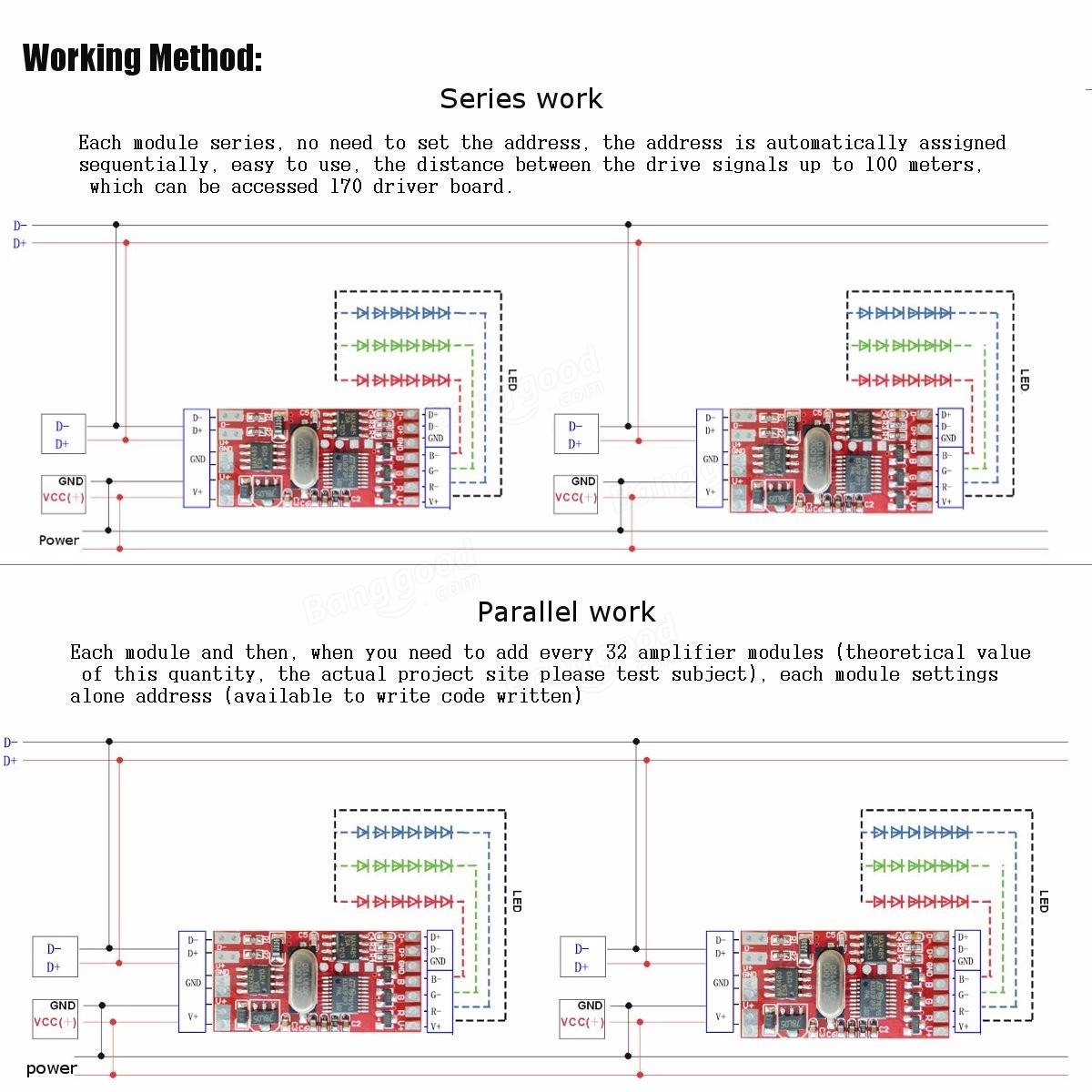 The lower pcture parallel method seem to be as it should. But the upper series work seems to have the exactly same drawing – I think that the second decoder board should get the signal from the output of the first board, otherwise connection does not make sense. The boards have for a reason DMX-512 input and output.

On my short testing 72W 3 Channel DMX512 Encoder Decoder Board Codering Module for RGB LED Stage Light board seems to do what it promises on the features I tested. I could not test all the features, because I had only one decoder power and only low power RGB leds.