Virtual reality with smells and taste will meet synthetic food

The 6 Creepiest Lies the Food Industry is Feeding You article claims that the food industry is based almost entirely on a series of lies that most of us just prefer to believe. Everything we love to eat is a scam article tells that pretty much on the same line. So how easy is to fool our tastes? Yes. Can we make artificial food that tastes like traditional food? Yes. Can we fool our senses electrically? Yes.

Electric Chopsticks Add Salty Flavor Where None Exists article tells how a special pair of chopsticks built by Nimesha Ranasinghe could let you experience that great salty taste without actually consuming any salt. Nimesha Ranasinghe is an assistant professor and director of the University of Maine’s Multisensory Interactive Media Lab is researching on sending sensations remotely – for example how to transmit flavors over the internet. Ranasinghe was able to successfully recreate saltiness, sourness, and bitterness tastes using metal chopsticks as electrodes. Tastes are generated by sending different voltage and frequency of the electricity using battery and an Arduino to chopsticks. Some more details can be read from IEEE Spectrum article Hacking the Flavor of Food With Electric Chopstick that also tells that he also made an electric soup bowl that imparts flavors when people slurp directly from the bowl and a virtual cocktail glass. There is also scientific article on the study (behind paywall).

Researchers can also create virtual smells by electrocuting your nose. IEEE Spectrum article These Researchers Want to Send Smells Over the Internet tells that researchers have used electrical stimulation of cells in the nasal passages to produces sweet fragrances and chemical odors. The researchers who are working on “digital smell” are still a very long way from practical applications—in part because their technology’s form factor leaves something to be desired. Right now, catching a whiff of the future means sticking a cable up your nose. By stimulating your olfactory nerve with a system that looks like one of those old-fashioned kids electronics kits.

We know that good stories and nice visual apperarance can me your food taste better. How about using virtual reality for that? Virtual reality makes food taste better article tells that Cornell University food scientists found that cheese eaten in pleasant VR surroundings tasted better than the same cheese eaten in a drab sensory booth.That’s right: cheese tastes better on a virtual farm versus inside a blank, empty cyberia.

If we can make taste and smell artificially can we make food artificially? Yes we can. Some researcher see that there’s a looming crisis over the world’s growing appetite for meat. Cultured meat, also called clean meat, synthetic meat or in vitro meat, is meat produced by in vitro cultivation of animal cells, instead of from slaughtered animals. This is actual meat grown from animal cells and variously described as cultured, synthetic, in-vitro, lab-grown or even “clean” meat.

On August 5th 2013, the world’s first lab-grown burger was cooked and eaten at a news conference in London. In 2013 the first lab-grown burger was served up, so where are our synthetic steaks now? The artificial meat factory – the science of your synthetic supper article takes a look at the cultured meat market and the race to mass-produce in-vitro meat. Would you eat slaughter-free meat? Some people have do that already.

We Tried The First Lab-Grown Sausage Made Without Killing Animals. This Is What It Tasted Like article tells the experience on tasking lab made sausage. New Age Meats’ sausage was the first in history to be made with fat and muscle cells made in laboratory. And according to article it tasted like sausage made of normal meat. The places where the meat of the future will be produced can look like today’s brewery. Would you eat slaughter-free meat? article shows chicken nuggets that were grown in a lab from cells taken from a living animal.

Protein produced from electricity to alleviate world hunger article tells that researches can generate protein using just air and sun. A batch of single-cell protein has been produced by using electricity and carbon dioxide in a joint study by the Lappeenranta University of Technology (LUT) and VTT Technical Research Centre of Finland. Protein produced in this way can be further developed for use as food and animal feed. Scientists claim that generating protein from co2 and electricity from solar panel is far more efficient than making meat protein traditionally.

I am thinking the is the time when synthetic food will meet virtual taste. When this has been said in public, I will expect someone to do that pretty soon. 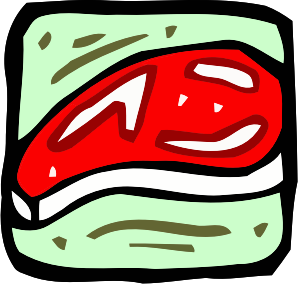