Any form of energy, when not properly controlled or harnessed, can result in serious danger to those who use it. Electricity at any voltage can be dangerous and should always be approached with caution. Direct Dangers of Electricity include a variety of hazards that include Electric Shock, Physical Burns, Neurological Damage and Ventricular fibrillation resulting in death. The indirect dangers of electricity include for example fall due electric shock, an explosion, or a fire.

Electric Current affects the body when it flows through. Human can feel around about 1 milliampere (mA). The current may cause tissue damage or heart fibrillation if it is sufficiently high. 10-20 mA is beginning of sustained muscular contraction (“Can’t let go” current) and 30 mA can cause the onset of potentially fatal respiratory paralysis. A low-voltage (110 to 220 V), 50 or 60-Hz AC current travelling through the chest for a fraction of a second may induce ventricular fibrillation at currents as low as 60mA.

Today’s U.S. electricity system is a complex network of power plants, transmission and distribution wires, and end-users of electricity.
Electrical safety is the leading subject in the North American power industry, but at home people in USA are stuck with a 100+ year old plug design that is far behind other countries in terms of safety features.

ARE AMERICAN PLUG SOCKETS DANGEROUS? video gives some observations about the differences between the UK and US electrics and fire safety:

“Each year, approximately 2,400 children suffer severe shock and burns when they stick items into the slots of electrical receptacles. It is estimated that there are six to 12 child fatalities a year related to this.”
I guess that data makes me wonder about those who say they are safe.

Perhaps the weakest link in the US electrical system video gives on overview of dangers of electrical outlets and extension cords.

Most of North America (and Central America, and some of South America) use connectors standardized by the National Electrical Manufacturers Association. Those connectors are called NEMA connectors.

NEMA 1-15 ungrounded (Type A) plugs have two parallel blades and are rated 15 A at 125 volts. They provide no ground connection but will fit a grounding NEMA 5-15 receptacle. Ungrounded NEMA-1 outlets are not permitted in new construction in the United States and Canada, but can still be found in older buildings. You can shock yourself with many USA NEMA connectors if you just slipped around the end at the wrong moment. That is the original plug from the very early 20th century… It couldn’t be changed later because there were too many NEMA-1 outlets in service.

NEMA 5-15 grounded (Type B) plug has two flat parallel blades like NEMA 1-15, and a ground (earth) pin. It is rated 15 A at 125 volts. The National Electrical Contractors Association’s National Electrical Installation Standards (NECA 130-2010) recommends that sockets are mounted with the ground hole up so that a falling object makes first contact with the ground pin. This socket is recommended in IEC standard 60906-2 for 120-volt 60 Hz installations. NEMA 5-15 grounded (Type B) sockets accepts also NEMA 1-15 ungrounded (Type A) plugs. In stage lighting, this connector is sometimes known as PBG for Parallel Blade with Ground, Edison or Hubbell. “Typical” 120v receptacles are protected with 15A breaker. This protects the outlet against overload. 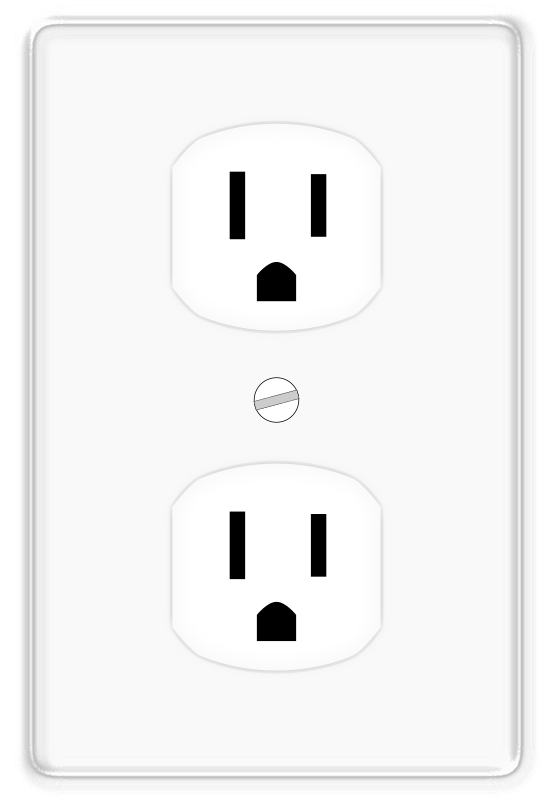 Starting with the 2008 Edition of the NEC (National Electrical Code) the NEC has required tamper-resistant receptacles be used in certain locations. The NEC has been increasing the requirement for receptacles to be tamper-resistant with the revisions after that.
Tamper-resistant receptacles work by having a plastic shutter in front of where the plug gets inserted, which is only moved out of place if objects are placed into both slots of the receptacle TR-rated outlets feature “TR” engraved into the outlet faceplate, typically between the two prongs. The shutters remain closed until the proper plug is inserted. This ensures that items like knives, forks, or loose jewelry are not able to access plugs, thus reducing electrical shock injury.

Nothing is safe. There are only degrees of safety. None of these designs can always prevent a determined or negligent person from electrocuting themselves.

There are also higher current than 15A outputs in use in USA, but a general-use receptacle cannot be on any circuit larger than 20 amps. The NEMA 5-20 AP variant has blades perpendicular to each other. The receptacle has a T-slot for the neutral blade which accepts either 15 A parallel-blade plugs or 20 A plugs. The NEMA 5-20 AP wall socket can accept both 20A plug and 15A plug.

While normal electrical outlets in USA output 120V AC, that’s not the whole story and the voltage the power distribution to most houses work. The distribution voltage is normally the sum of the two 120V lines that are are at opposite phase (180 degree phase shift) plus neutral wire. But in some cases power can come from two 120V lines that have 120 degrees phase shift (some locations which use certain type of three phase power feed). Learn about the US electrical system in this The US electrical system is not 120V video:

US electrical system uses circuit breakers as wiring and fire protection. Circuit breakers are there to stop the cable in the walls of your house melting and possibly catching fire – circuit breakers and fuses perform the function of stopping a fire (which of course is also very dangerous to life). Standard circuit breakers shut off power when the current is too high, like 10, 15, or 20 amps, but a mere 0.030 amps through a body can cause paralysis of skeletal muscles and stop the human heart.

If you are at new house built according current code, you are likely to have also GFCI or AFCI designed trip before anything bad happens. GFCI can protect in many cases against human touching live wire and ground at the same time. But GFCI does not provide protection in all cases, for example if you have your finger between live and neutral contacts on mains plug. AFCI is designed trip if there is arching on the wiring like bad contact, loose wire or failing insulation on wire. AFCI can detect many problems, but not all.

Generally, when things get hot because of overloading, it’s at the connection point and not in the wire. For instance, a lot of electrical fires start at the plug/socket interface either because the connection is poor, there could be corrosion, etc. And sometimes they can happen when nothing is overloaded! This is one of the circumstances in which arc-fault circuit interrupters can save lives.

Overloading an electrical outlet is a common cause of electrical problems. Theoretically the breaker should protect the outlet against overloads, but it does not always do that especially if outlet or wiring is in bad condition. Do not use cords, plugs or outlets that appear damaged, replace them. Always ensure plugs are fully pushed in. Check all outlets to ensure they are cool to the touch, have protective faceplates and are in proper working order. Only grasp plugs by the plug body, keep fingers away from the front edge near the pins and do not pull plugs out by the cords.

There is a a recommendation that do not use extension cords or multi-outlet converters for appliances, because there are many problems related to US extension cords.

Damaged power cords are a serious residential electrical safety risk, and they are capable of causing both fires and electrocution. All power and extension cords should be checked regularly for signs of fraying and cracking. Power cords should not be stapled into place or run under rugs and furniture.

Besides making sure that the extension cord is in good shape, you need to be really careful that type of extension cord you use in USA. An extension cord essentially is a bundle of insulated electrical wires with a plug on each end. Electrical current flowing through wires generates heat, and when too much current flows through a wire, it can overheat and melt the plastic insulation of the wires, causing short circuits and fires.

But if you use an undersized extension cord to extend the reach of that appliance cord, you can exceed the safe load capacity of the extension cord, and the result can be disastrous.

When purchasing a power cord, consider the electrical load it will carry. A cord with a load of 16 AWG can handle up to 1,375 watts. For heavier loads, use a 14 or 12 AWG cord.

Equipment or in-wall wire heating is normally not a problem when you plug an appliance directly into an outlet using its factory cord because the manufacturer has sized the cord appropriately for the electrical current demand of the device. The size of wiring inside wall is rated based on the breaker size on the mains panel (typically 15A or 20A). The size of the wire on the extension cord can be condiderably thinner, and the mains panel breaker might not protect it against overheating due overload. Some better extension cords can have their own overload breaker built-in but not all.

I think allowing unfused 16 gauge (16AWG = 1.5 mm2) extension cords into the market is a potentially bad link in the chain that we could probably do with cutting out. That wire is still pretty OK up to 15A load current, will get warn. If you plug it to 20A outlet and load with 20A total load, it can get dangerously hot (around 1.8 times more power heating the cable at 20A than at 15A). Pulling 20 amps through that cord made it get very hot quite quickly.

In fairness, it used to be much worse. 18 gauge (maybe even 20 gauge) extension cords were available many years ago, but regulators had the sense to make 16 the minimum as time went on.

There are also small compact ungrounded extension cords that have such designs whete users can plug in plug so wrongly that they are halfway out leaving the live parts so that the live main voltage can be present on the exposed mains plug pins.

Most electrical fires aren’t the result of a single thing; they’re a cascade of individually not-great circumstances combining to make a bad situation. In order to reduce the risk of fires, we’ve continually been making the not-great things less bad.