Write-only memory has been one of the best practical jokes on the electronics industry field.

Write-only memory (WOM) is the antithesis of read-only memory (ROM). By definition, a WOM is a memory device which can be written but never read. The WOM concept is most often used as a joke or a euphemism for a failed memory device.

An engineer at Signetics, frustrated by the long and useless sequence of approvals for data sheets (during which no actual checking occurred), once made up a spec for a “Write Only Memory” (a “WOM”) and sent it along with a batch of other data sheets to be approved. The WOM data sheet went through the approval chain, just fine, and wound up in Signetics’ new products catalog at 1970′s. Only after customers began asking for price and delivery. Signetics shortly printed up new “corrected” databooks, without any WOMs, and asked for the “erroneous” ones to be returned.

About 1974, Signetics bought a two-page, full-color spread in the April issue of ELECTRONICS Magazine, and published the WOM data sheet, as a (rather expensive) April Fool’s Joke. The data sheet is quite funny reading even today. 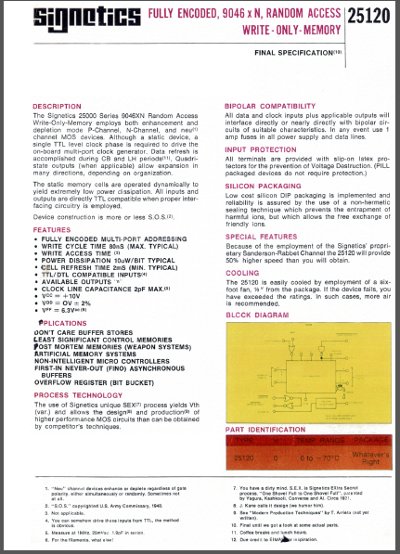