A friend called from a big computer festival Assembly 1999 that was starting. It was one of the biggest this type of event in Europe with thousands of people coming with computers. Some of my friends was running big screen and video streaming for the event.

They had all the stuff rented and set up for the event by the AV contractor. Everything worked flawlessly on the previous day. But on the first day the audio and video system started picking up lots of noise. The audio signal had mains humming in it, and video signals had “humming bars” on them. As more computers get powered up on the hall, the worse the noise becomes. We are not talking about few computers, there was over two thousand computers on the hall. 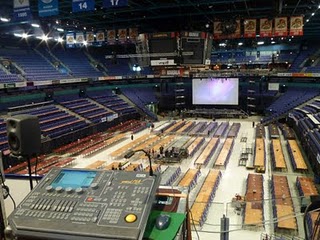 I walked in to the even with my tool-set. Solving the audio problems involved sorting out the lines that picked most noise. Most of the audio connections were analogue (both balanced and unbalanced) and most video connections used composite video interface. I walked in to the event with necessary tools. A combination of audio signal isolation transformers and “ground lift” on some balanced audio lines made situation OK.

Video signals were a tougher problem. There were some very long video line runs from the main video mixer to different locations (projectors for big screen, smaller screen etc..). Those long video lines seemed to have lots of noise in them. I measured form 100 mA to 1 ampere mains AC current on coaxial cable shields on the cables with most humming bars! Disconnecting some of those longest lines made the video system to work noise free, but what to do because we can’t live without connections to video projectors.

The main program on the event was starting on the next day, so this problem needs to be solved so that everything works flawlessly or at least “well enough” by tomorrow. I know I would needed some type of video signal isolation devices for those problematic video lines, but our equipment supplier did not have them. It was already quite late night, so it was impossible to try other sources.

Fortunately I had one prototype of video “humbugging” transformer with me. It was a common mode choke built by winding thin 75 ohm coaxial cable over a suitable toroid transformer core. This device reduces the amount of current flowing on coaxial cable shield and reduces the noise pickup. I built the device based on some old documentation (someone sent me old document from BBC on hum bugging transformers). I tested this DIY “humbugging” transformer on one of the video lines, and it worked very well. The amount of noise on that video line was reduced to point that it could no longer be detected on the big screen.

The problem is that there were also other lines that seemed to need the same kind of treatment. I went to home lab, trying to gather whatever parts I could find to build more such devices. I ended up building three more on the night from the part I could find – I even managed to find nice plastic cases for them. Next morning I came with my brand new “humbugging transformers” to the event. They worked and saved the show next day. What I made looked pretty much like this inside (this is a later made version that uses the same box). 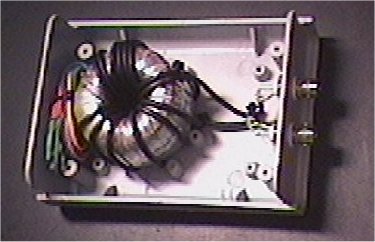 In the end the video equipment provider that rented most of the video gear for the event end up buying my boxes after the event at decent price. I ended later making some more for this company. I ended up making more on then when needed for some video companies. Quite often when I first rented few of them to solve an emergency, they wanted to buy them for themselves.

They have performed very well on many video systems to solve ground loop problems. There are passive hum suppressor transformers that will very effectively remove the hum from the video signal, but do not affect the video signal otherwise. Those special transformers act like a common mode coils, which stop the annoying ground loop currents on the shield of the coaxial cable, but provide a straight path for the signal inside the cable. This type of device is capable of passing the signals from DC to tens of MHz without problems. The hum suppressor transformer both reduces the current flowing on the cable shield and compensated the voltage differences that would otherwise be between cable ends and eventually get to the signal.

I ended doing more audio and video tricks to keep this event running,