An ideal power inverter will produce same kind of power that is available from mains outlet, which typically means sine waveform 60 Hz 11-120V AC or 50 Hz 220-240V AC. That kind of power source can power all mains powered devices as long as enough power is available. Where power inverter devices substitute for standard line power, a sine wave output is desirable because many electrical products are engineered to work best with a sine wave AC power source. The standard electric utility provides a sine wave, typically with minor imperfections but sometimes with significant distortion.

Sine wave inverter is a power inverter device which produces a multiple step sinusoidal AC waveform is referred to as a sine wave inverter. Almost all consumer grade inverters that are sold as a “pure sine wave inverter” do not produce a smooth sine wave output at all, just a less choppy output than the square wave (two step) and modified sine wave (three step) inverters. However, this is not critical for most electronics as they deal with the output quite well.

Making a pure sinewave inverter is (in theory) not especially difficult. All you need is a sinewave oscillator of the right frequency, a power amplifier to provide the current you need, and a transformer to increase the voltage to 230V or 120V RMS. Unfortunately, this is very inefficient and makes poor use of the battery’s capacity. Expect to get very high conversion losses so that almost half of the input power is lost in conversion process. Expecting better than 70% overall efficiency is generally unrealistic unless the sinewave is clipped to the extent that it resembles a squarewave.

One idea for laboratory use: function generator generates 50 or 60 Hz sinewave, that wired to hifi or PA amplifier that drives mains transformer low voltage winding. You can get some low power (up to tens of watts) at very pure sinewave at amplitude and frequency you want. The downside is expensive, low power and poor efficiency. A wien bridge oscillator can be used to generate sine wave. If you feed that sinewave signal to a powerful amplifier connected to a transformer, you can make an inverter. I have used sinewave fron function generator wired to audio amplifier wired to transformer to make AC at various frequencies.

For laboratory use you can make a low power sinewave inverter by taking a 50 Hz or 60 Hz signal source (function generator or other oscillator circuit that can give out sine waveform), suitable audio power amplifier and power transformer for stepping up the output voltage. If you amplify the signal with the amplifier to for example to 12V, and feed that to the transformer 12V coil, you can get low power sine wave mains power out from transformer primary. When using this method you need to keep in mind that the output power is limited by the power available from amplifier and that the load needs to be within amplifier safe operating range (typically expect to have 4 or 8 ohms speakers in them). Also in some audio applications 100V line voltage is used (either directly from amp or using step-up transformer). With this method you can’t get very high powers and efficiency is bad.

Most of the conversion power loss in this method happens at the audio power amplifier. With typical AB type HIFI audio amplifier, the amplifier is only 50% efficient. With different kind of amplifier you can get the system more efficient. It’s possible to get a properly designed Class-D amplifier to have an efficiency of between 80% and 90%, but there will also be transformer losses that must be considered. Modern switching audio amplifiers need no or small heatsinks even for 100s of Watts.

Can you convert a square wave to a sine wave in an inverter output? It is theoretically possible to filter square signal to sine wave, but that’s not generally practical approach, because the needed power components for the filter would become big and expensive.

Let’s pick one circuit example from this category. Quora mentions that L-C resonant filter have been earlier used on some square wave to sine wave conversion applications. Web page https://www.quora.com/How-do-I-convert-a-square-wave-to-a-sine-wave-in-an-inverter-output that you can use a set of harmonic traps like this: 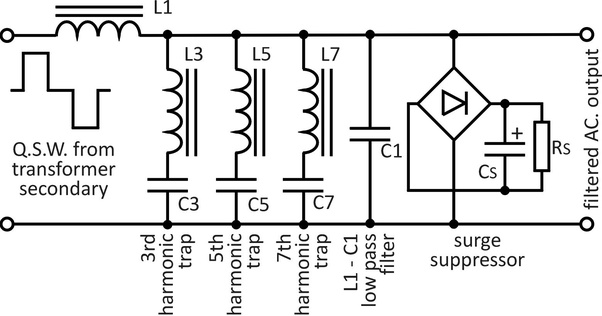 Each series L-C set is tuned to be resonant at its specific harmonic. This means that the set appears as a near-short circuit to that harmonic frequency. Capacitor C1 is a “tank” capacitor chosen to be resonant with the overall equivalent inductance of the upstream components at the fundamental frequency..
This filter is quite large and heavy, and can only bring the total harmonic distortion in the output voltage waveform down to 10% at best. Thus quasi-square wave inverters have largely been replaced by other high-frequency modulation methods.

PWM is the technology of choice for maximum efficiency and a clean sinewave output. Many inverters use a PWM to create a waveform that can be low pass filtered to re-create the sine wave. The modulation frequency should be high enough to ensure no-one can hear it, which typically means at least 25kHz. Lower frequencies can be used, but the noise from the transformer or filter inductor may be intolerable and the filter components will be larger and more expensive.

Generating the PWM waveform is (at least in theory) delightfully simple. A sinewave is fed into one input of a comparator, and a linear triangle waveform into the other. When the signal voltage is greater than the reference, the output of the comparator is high and vice versa.

The signal can also be generated with a special IC or a microprocessor. If microprocessor is used to generate the switching timing, the harmonic content and efficiency can be closely controlled.

The other method is to use a switch-mode step-up power supply to convert the voltage up, and then use high voltage FETs to generate the mains output from it. The output stage then works with the full peak voltage, either 325V or 170V DC, to suit 230V and 120V mains respectively. You can view the electronics inside one such inverter at my tear-down article at https://www.epanorama.net/blog/2017/05/20/sinewave-dc-to-ac-inverter-teardown/.

WARNING: Those circuits produce potentially lethal output voltages! Those circuits operate at quite high power, any mistakes on the circuits can lead to electrical shock and fire danger. I have not tested those circuits myself, so I can’t guarantee that they work at all. Use those only as generic reference to understand circuit operation, and do not try to build your own inverters based on them unless you understand all the dangers involved and can add the needed protection circuits that could be missing from the presented designs.

PWM Inverter Circuit diagram project page at https://theorycircuit.com/pwm-inverter-circuit/ describes a project that claims to be simple and powerful PWM inverter circuit. It promises to give up to 230V AC from 12V DC supply. 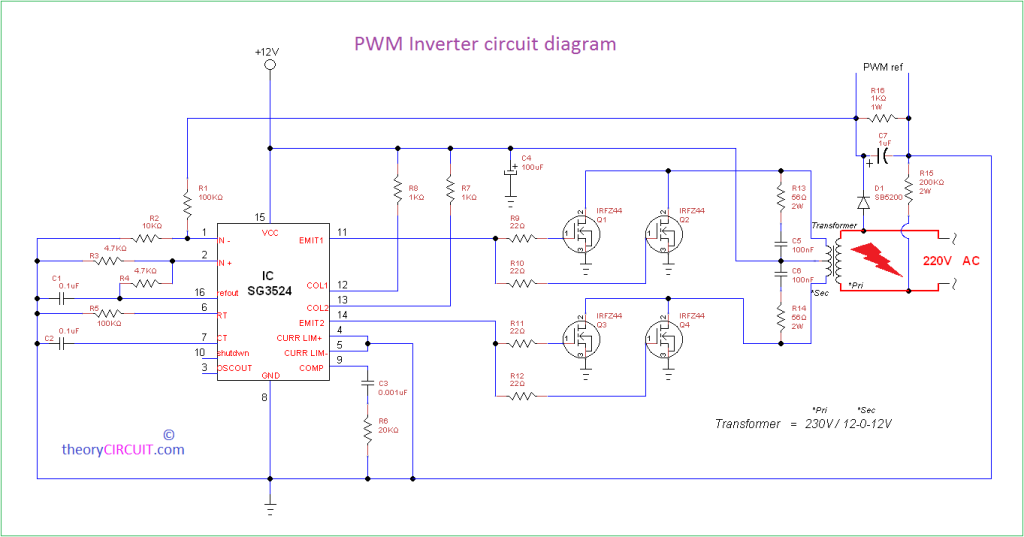 The circuit is diagram designed with IC SG3524 (Regulating Pulse Width Modulator) that drives power MOSFETs. The PWM switching pulse generator is the main part of this circuit, which is responsible to produce PWM pulse according to the sine wave reference. Output from Emit1 and Emit2 pins are directly fed into Switching device that is constructed by N channel MOSFET IRFZ44. The step up Output driver contains a transformer 230V primary to 12-0-12V secondary with 2 Amp current rating, which means power is limited only to around 24W only.

DIY Cheap 1000W Pure Sine Wave Inverter (12V to 110V/220V) project at https://www.instructables.com/DIY-Pure-Sine-Wave-Inverter/ is a detailed tutorial on building a HIGH POWER 12v to 220v pure sine wave inverter board from scratch. The project is based on the low cost EGS002 SPWM driver board module. The DIY inverter board is claimed it can handle up to more then 1kW, depending the transformer size that you are using. 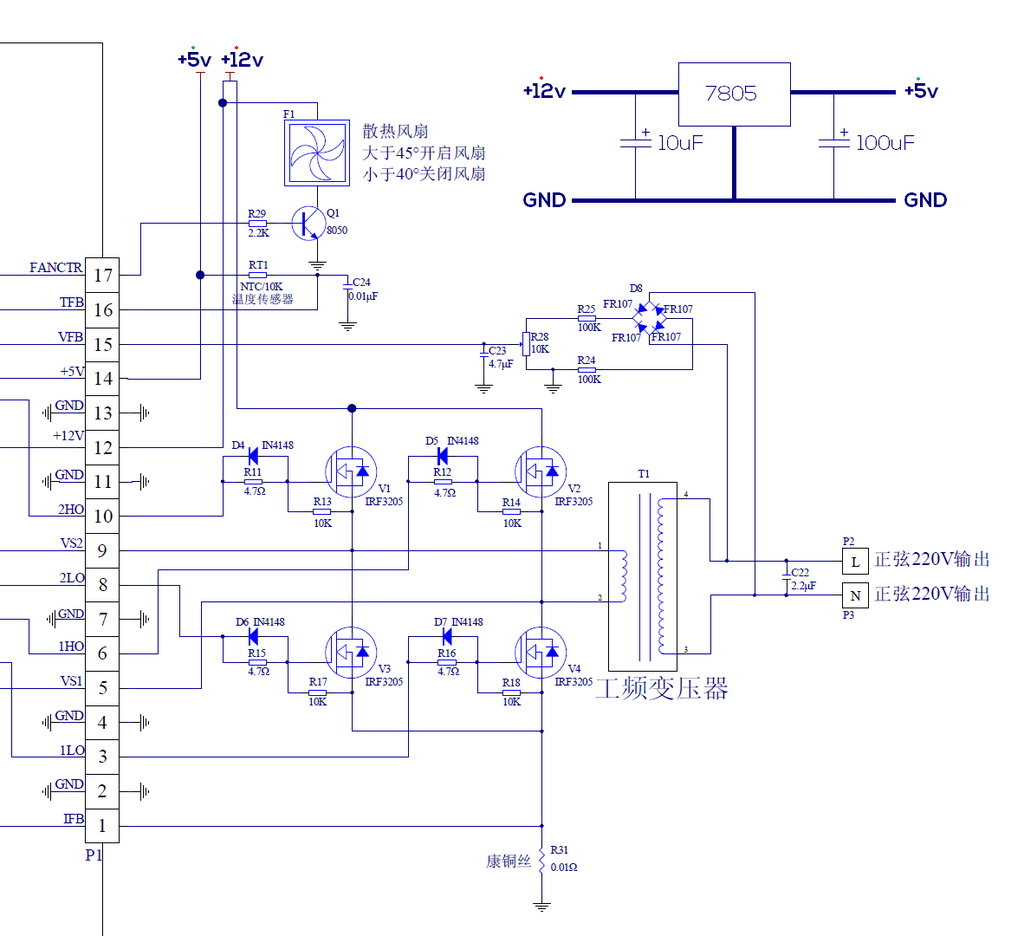 Here the EGS002 SPWM driver board module does all the magic generating the drive signals for the FETs that form a H-bridge driver that controls the power transformer primary. Here is a video of the project: DIY Cheap 1000W Sine Wave Inverter (12V-220V – EGS002)

The project Facebook posting describes the project like this:
- The surplus UPS inverter transformer is suspected to be a 500W based from forum discussions of its unknown part number.
- If connected to a larger transformer, the board should be able to accomodate +1kW.
- Standby power consumption ranges from 12W-17W depending on transformer used. Can still be improved.
- Uses an EGS002, a driver board that contains most of the logic and driver circuits. You can design and build different types of closed loop inverter structures with different max power output around the module.
- Ouput voltage regulation is good.
- Effeciency can be increased by building a single coil inductor version for high speed switching. (smaller by build size too!)

Simple Sinewave Inverter Circuits web page is a collection of simple sinewave inverter circuits, which can be customized for different needs. Those ideas may help you to achieve your objectives

Does it suck? Chinese DIY Pure Sine Wave Inverter || Sinusoidal PWM (SPWM) Tutorial video tells the basics about SPWM and show you how we can use it to create a pure sine wave. It will have a look at the EGS002 which is a cheap SPWM driver board from China that can be used to create a DIY pure sine wave inverter.