The secret to sending signals over UTP is to balance them well in order to limit both radiation and noise pick up. To produce a balanced signal from unbalanced signal BALUNs are used, standing for BALanced to UNbalanced. BALUN works also to other direction converting balances signal to unbalanced.

For at least 20 years products have been available capable of transmitting video using UTP wire. There are nowadays many adapters. There are both passive solutions (balun transformers) and active converters available on the market for this application. I have already posted my video balun plans, a commercial video balun teardown and also information on active video over UTP adapters.

Here is a review on the passive video baluns and how they work. The secret to sending analogue video signals over UTP is to balance them well. Video balun is a device made for this. I earlier write about Video over UTP and my own experiments related to it. Here is a look wat what is inside a commercially made inexpensive video balun, in this case LLT-201 from Dealextreme. That video balun works pretty well for carrying composite video over CAT5, CAT5e or CAT6 UTP cable (and also works on older telephone wiring on short distances).

There are two distinct designs for video baluns – isoolated and non-isolated. Both use transformers. There is isolated balun no direct connection between input and output. Isolated video baluns are rare but have certain advantages, especially immunity from ground loops – but are typically rate and expensive. Most cheap video baluns you will see are non-isolated.

Broadcast-quality video typically requires performance all the way down to DC. Since a traditional video transformer cannot pass DC and is expensive, a current mode balun is the most commonly used technology for video baluns. The following picture from How does nanocrystalline common mode choke work? article: 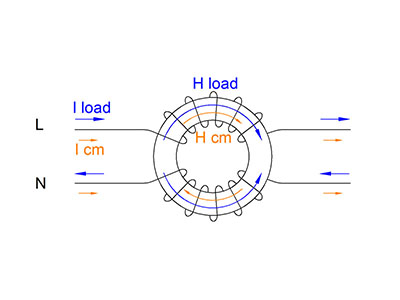 The operating principle is that the inner conductor and the inside of the braid act as two opposing bifilar windings with substantial inductance inserted in the outside of the braid. Differential current passes through such a transformer with little insertion loss as the opposing windings of the transformer mode effectively eliminate the winding inductance. The same principle applies in the common-mode choke where two or more wires pass through a ferrite core.

This design will pass DC nicely and will do balancing. This design does not offer any impedance matching. The impedance mismatch 75-to-100-ohms gives calculated return loss of 16.9 dB, which is quite acceptable, especially to situations where the baluns are situated next to the equipment on both ends.

Here are two video balun circuits I have built myself. The video balun is implemented with the wires on the toroidal core. In addition those circuits have other transformers for handling optional audio signals. 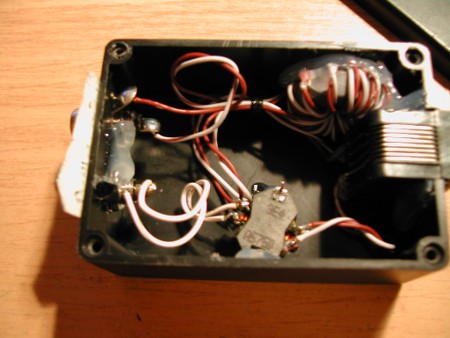 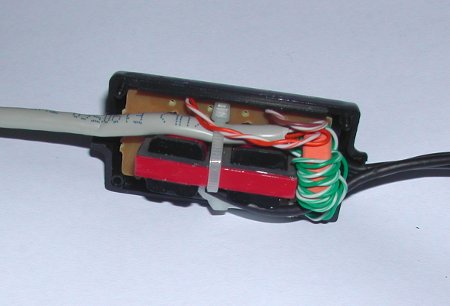 Here are some teardown pictures of cheap commercial video balun posted to CCTVFORUM: 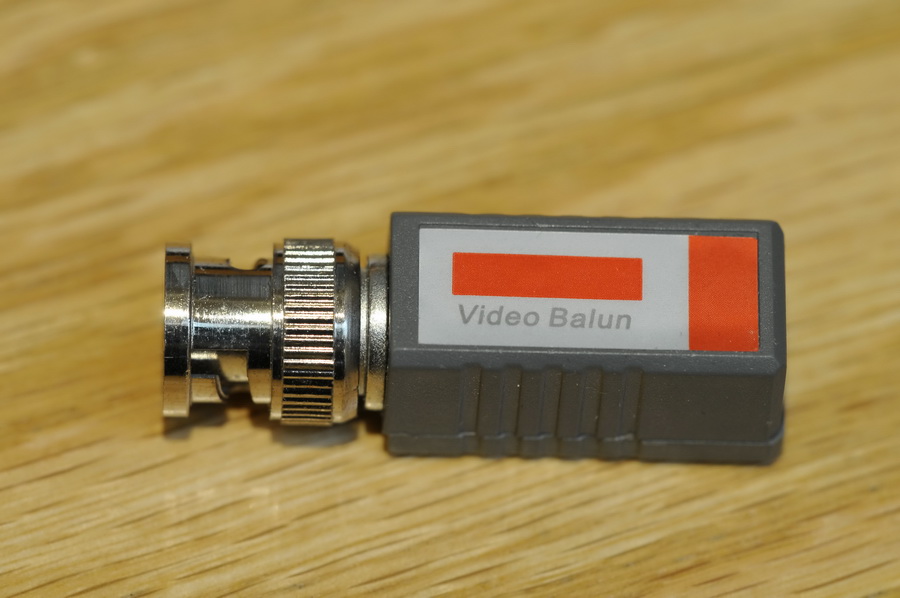 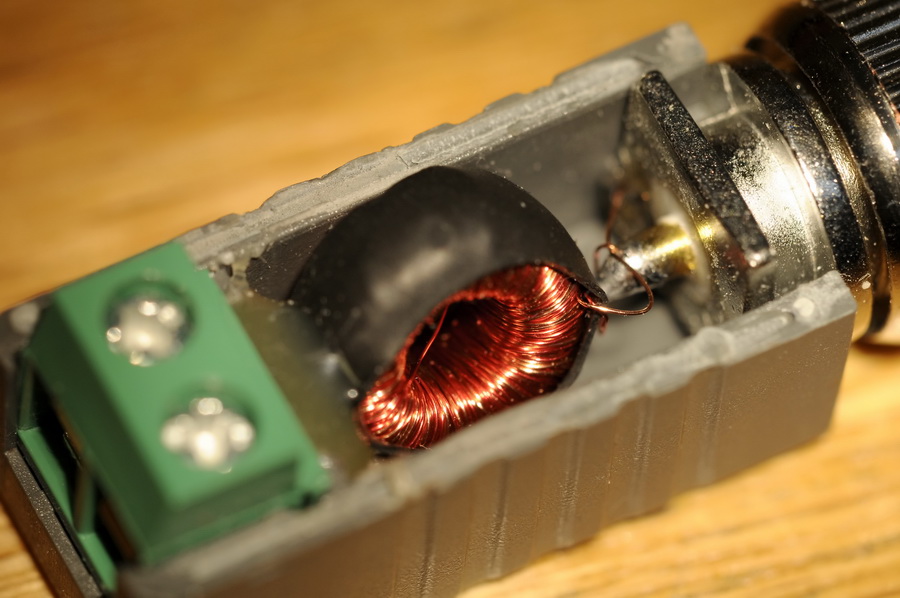 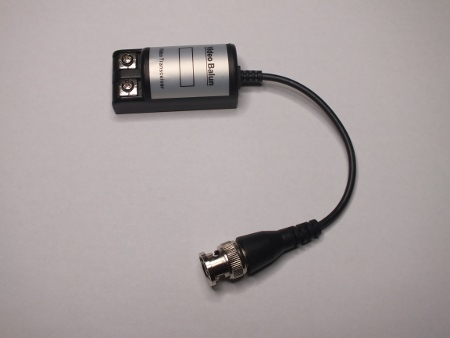 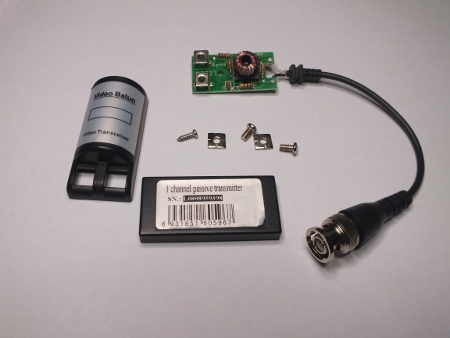 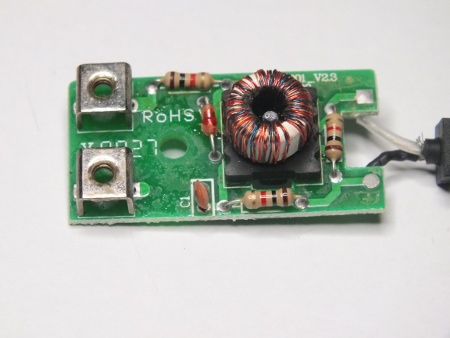 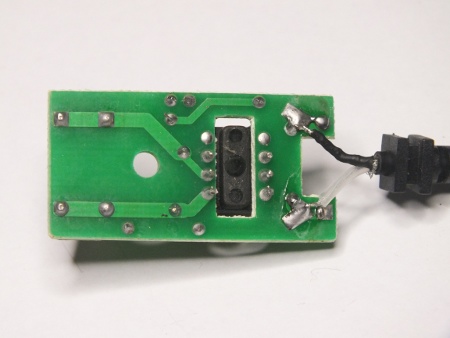 Ad you can see inside the device there are just one special transformer, few resistors, one capacitor and one semiconductor that looks like diode (I quess that it some type of over-voltage protection component). The transformer is would on toroidal core and has three windings that look like to have same number of turns in then. To get idea of the transformer I also measured the inductance of one coil with my RLC meter and got reading 14 mH.

I looked at the circuit board and I draw a circuit diagram of the device based on that: 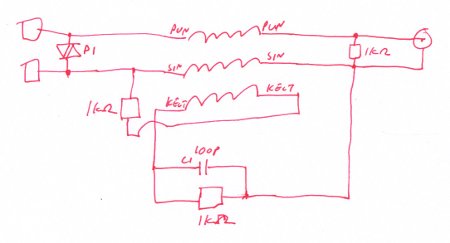 The two upper coils seem to form a current balun / common mode construction like what I described on my Video over UTP. The special thing seems to be on the third coil and the components connected to it.

I think that they could in some way tape part in some form of impedance conversion circuit (75 ohms to 100 ohms), but I am not completely sure of that. I tried to measure the impedance on the both sides of the circuit, but I did not see any significant impedance conversion: When there was 75 ohms on the BNC side, the twisted pair side was still closer to 75 ohms than 100 ohms. Anyway the balancing act seemed to work well.

I saw another take on analyzing the video balun technology at https://electronics.stackexchange.com/questions/488272/explain-how-this-cctv-video-balun-actually-works 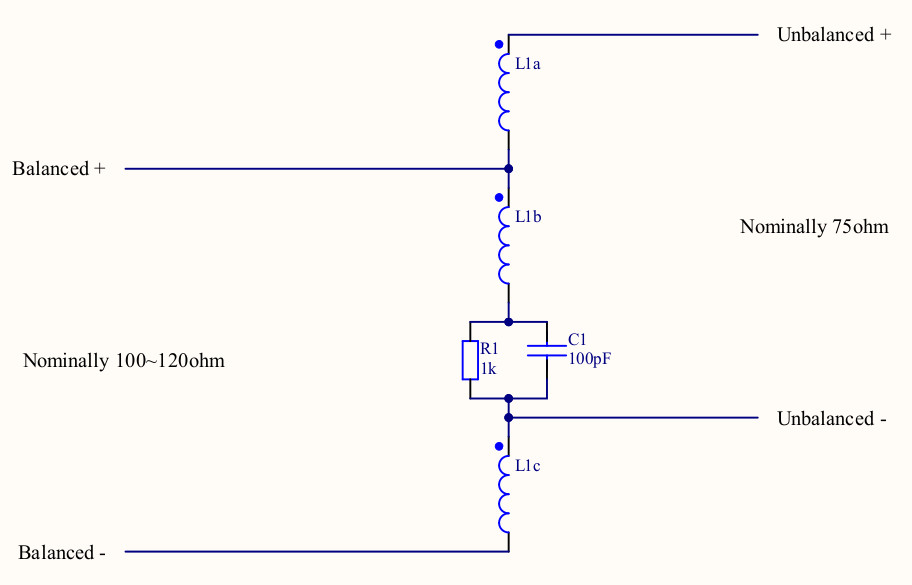 I suspect that the RC circuit is there to provide gain that increases with frequency (impedance drops from 1k at DC to 256 ohms at 6MHz), and perhaps does a dirty 100ohm to 75ohm conversion via loss?

For now ignore the capacitor and treat it as a short circuit. you can see that the signal comes in on the lower two transformer segments goes out on the upper two segments it’s acting as an autotransformer. shifting the signal up by half its voltage converting balanced to unbalanced. (this is the Ruthroff topology mentioned in comments)

So what about the capacitor?
Video is a baseband signal the balun need to pass DC so what the designwer did is insert that capacuitor into the autotransformer between balaced+ and ground (unbalanced – is signal ground)

So DC signals put in on balanced + and balanced – will come out unaltered between unbalanced + and ground. For low frequency signals the capacitor does not affect much, so the circuit works pretty much like a current mode balun. The resistor is probably there to stop charges from building up on the capacitor or just add some small controlled amount of transformer impedance matching at low frequencies (1 kohms is still high enough value not to disturb 75 ohms video signal).

If the capacitor+resistors were short-circuited, this whole circuit would act like a traditional balanced-unbalanced conversion transformer. If all coils had same number of turns, this would provide 1:1 impedance transfer ratio and would short circuit DC.

One thing that I will add is that baseband video does not extend all the way down to DC, because it uses a vestigial lower sideband for the Luminance part of the signal. the cutoff is somewhere around 400kHz IIRC. I ended up doing some simulations in LTSpice (assuming perfect coupling in the transformer). The capacitor appears to do most of the work on common-mode rejection, but it is not perfect and varies with frequency, but at least it’s something.

That was an interesting vied to the video balun operation. I thinks the later drawing makes it more clear to see how the circuit would work.