An audio multicore cable (often colloquially referred to as a multicore, snake cable or snake) is a thick cable which usually contains 4–64 individual audio cables inside a common, sturdy outer jacket. Audio multicore cables are used to convey many audio signals between two locations, such as in audio recording, sound reinforcement, PA systems and broadcasting.

Multicores usually create a link between the stage and sound desk, or live room and control room. When used in sound reinforcement, the multicore cable runs from the stage box or microphone splitter to the front-of-house sound desk, where it connects to a mixing console. The signals going on the multicore cable are typically balanced microphone or line level signals. The vast majority of audio multicore cables consist of a number of shielded twisted-pair copper wires, suitable for balanced audio. The individual cables inside the multicore are usually screened independently. Multicore cables usually have a thick PVC or cross-linked polyethylene sheath protecting the bundle of individual cables.

In recent years there has been many attempts in sending audio signals over CAT5/5e/6/7 cable and even replace traditional “bulky” and expensive multicore cables with CAT5/5e/6/7 cable. I can see the financial attractiveness of using a couple of cat5e cables, and they might be persuaded to work in some situations. A mic multicore is a known, proven, robust and reliable solution which is readily available. If you are interested in more experimental solution, read further.

Although there’s an overall screen, each of the pairs in a cat5e cable are (usually) unscreened, and rely on different twist (lay) lengths to try and minimise crosstalk between the very high frequency signals they’re designed to carry. In contrast, a mic multicore uses identical lay lengths for each pair, but with individual pair screening (and sometimes an overall screen as well).

Interference from outside sources might not be too big a deal (as long as the cable doesnt get kinked or crushed), but it will be very reliant on the CMRR performance of the mic preamps, which varies considerably between different designs. However, my biggest concern would be for crosstalk between the different pairs in a cat5e cable. Crosstalk could be an issue but the twists are very tight, far tighter than any mic cable and are staggered so the adjacent pair does lay precisely aligned with the others. With well built balanced devices on the cable ends and signals at same signal level (all mic or line) things work usually OK. Even though a cat5e cable is designed to do a very different job to a purpose-made mic multicore, there are some products that claim to make it workable. You can run both balanced analogue line level signals and digital AES3 down cat5e. If you go for higher grade cable like CAT7 with individual per pair shield, the cross-talk issues are reduced.

There have been for some time been commercial products to convert XLR signals to CAT5 cable and back to XLR. SoundTools RAT CAT series of stage boxes, breakouts, and wall plates are designed to allow transmission of high resolution analog audio and data from XLR, DMX, or AES3 sources down Cat 5, Cat 6, or Cat 7 cables. A stage box unit with 4 channels allows to run mic level, line level analog, AES3, DMX and/or com down a single CAT cable. If more channels are needed several CAT cables are needed. There are also wall plate products that show XLR connectors on front and RJ-45 on the back.

Cat5e vs Audio Snake, Hear the Difference in Signal Loss of 100 meter cables

There are also other manufacturers that make products for the same application. Look for example following links
How to connect analog audio through cat 5 ethernet with the Radial Catapult
Audio Over CATx Cable – An Introduction to RDL’s Format-A System
Amazon XLR over CAT5 products

Besides commercial tools there are also DIY approaches for running audio over CAT 5/6/7 data cables. I have done that myself several times by soldering 6.3 mm jack or XLR connectors to the end of cut Ethernet cable. When you arrange the audio signals to different data pairs, balanced audio signals go over it quite well. For signal grounding I have used either one free data pair as signal ground in un-shielded cable. In shielded cable I can use the cable shield as ground. For balanced line level audio signals un-shielded and shielded cables have worked well. If your audio signals are not in balanced format, they do not transport too well over CAT 5 or 6 cables as they tend to pick up noise and crosstalk very easily. If you have unbalanced signals, it is best convert them to balanced before sending to CAT5/6 cable (signal converter or audio isolation transformer can be used).

There are several web pages in Internet that show how you can build your own XLR to CAT5 adapters. I will take a look at Jeff Geerling XLR over Cat5 – Balanced XLR Mic-Level & Line-Level Audio over Cat5 & Cat5e Cabling and Random Contributions DIY XLR ethernet cable audio snake on standard (unshielded) Cat5 Cat5e Cat6 cable pages. DIY XLR ethernet cable audio snake on standard (unshielded) Cat5 Cat5e Cat6 cable tells that advertised products and solutions of this type demonstrate 4 channels of XLR audio on single Ethernet wire, but require shielded Ethernet. The “trick” to maximize the number of audio channels on an Ethernet cable is through the sharing of the ground connection for each of the individual channels. This article will focus on using un-shielded Ethernet cable to get THREE (3) analog audio channels. Here is drawing from that article: 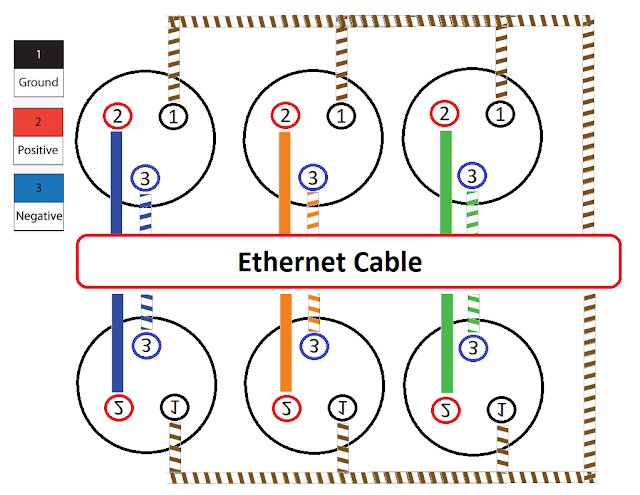 If you have shielded cable, you can add fourth channel by connecting all the XLR pins 1 to cable shied, and use the last wire pair (in above example used as common ground) as the fourth audio channel. Remember that if you connect this king of four channel circuit with unbalanced cable, you will loose the ground continuity, which can show up on noise performance and that phantom power on mics might not work. 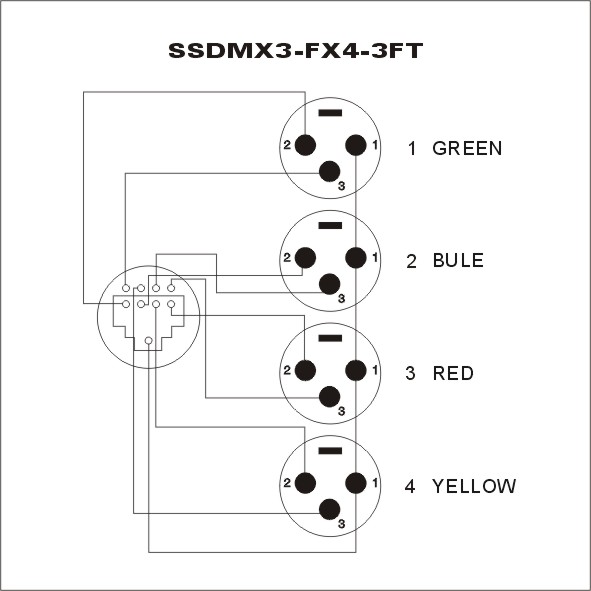 Trick to convert 4 channel adapter to 3 channel: Plug a special XLR plug where you have wired all pins 1,2,3 together to the channel 4 on both ends adapters. It will make the ground connection through the fourth wire pair.

You are free to build your DIY converters as boxes or as cables with many connectors. Both approaches should work as well electrically, but can have difference how much mechanical use and abuse they can take.

Some more discussion on DIY designs:
MUlticore cabling vs cat5/6/7 cabling for analog audio
Multi core cables vs Ethernet cables for snake connection
What makes a good Ethernet cable for audio applications?
Everything over Cat5 Cable

Another alternative to converting analog signals to Ethernet cable is to go full digital, where the audio is converted to digital format and transported as Ethernet data over CAT5/6/7 cable. There are cases where going digital and hooking up via catx cable makes a but more practical sense. But here there be dragons because there are a lot of different systems with different capabilities and — importantly — (in)compatibilities! There are several digital stagebox/snake solutions on the market that are entirely stand-alone and self-contained, with analogue converter stageboxes at each end. Others use variations of standard networking protocols that theoretically make them compatible with other manufacturers systems — or use proprietary formats that are compatible with certain manufacturers products. DANTE is one of the most popular right now, but there are many others. Several stage box devices can be powered also though Ethernet cable, link for example one shown in Neutrik DLINE & DPRO PoE Dante Audio Network Interface – Second Look video.